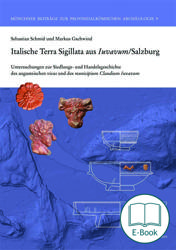 E-book 15.1 MB
Due to its large scale distribution and chronological relevance, Italian Terra Sigillata, which was produced in large quantities in Upper, Central and Southern Italy as well as Southern France, represents one of the most important archaeological sources for the early imperial period. It plays a decisive role in the discussion of the history of settlement and trade.
From Austria and the neighbouring areas, a large quantity of this fine ware has as yet only been published from the town on the Magdalensberg (Carinthia). With more than 1500 fragments, of which more than 1000 were typologically classifiable, a representative number of Italian Terra Sigillata can now also be presented from Salzburg/Iuvavum. These were found over the course of many years of excavations in the city, especially during archaeological investigations conducted over the last two decades of the 20th century.
Iuvavum was roughly equally supplied with Italian Terra Sigillata from workshops in central and northern Italy, as macroscopic investigations and chemical analyses (by G. Schneider and M. Daszkiewicz), but also more than 160 pottery stamps show. The earliest vessels are plates and bowls dating from the last decade B.C. and the first decade A.D.; however, forms of the 1st century A.D., of which more than 500 fragments are decorated with appliqués, dominate the assemblage.
The antiquarian analysis of the Italian Terra Sigillata from Iuvavum and the comparison of the Salzburg spectrum with those of other sites in Raetia and Noricum allow further investigations of the settlement and trade history of the town at the Salzach in the early imperial period: The earliest vessels suggest a smaller settlement founded in mid Augustan times, which was mainly supplied with products from northern Italy. Up to the middle of the 1st century A.D., when Emperor Claudius awarded the town the rank of municipium, it spread over the entire later urban area, with the majority of the Terra Sigillata now coming from central Italy. This change of origin of the Italian Terra Sigillata from Salzburg can probably be linked to a shift in supply structures and other transport routes. The north-south routes over the Tauern passes played a particularly important role. However, the westward connection towards Augsburg – at least in the early days – did obviously not influence the supply patterns of Salzburg with Terra Sigillata.