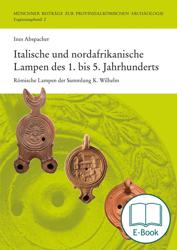 E-book 11.2 MB
In addition to some Italian picture lamps of the 1st century A.D., the main focus of K. Wilhelm's lamp collection is on 41 lamps of the middle and late imperial period produced in North Africa, as well as three singular plaster matrices for the manufacture of lamps with heart-shaped snout. The 32 red-tone, red engobed lamps from Central Tunisian potteries give an insight into the rich variety of snout and shoulder designs during the early phase of red-tone lamp production; they also show connections between the mirror decoration motifs and the appliquéd sigillata of the second half of the 3rd and 4th centuries. X-ray fluorescence analyses can be used to verify their production in two pottery centers.
The presented lamps are part of a collection of Roman fine pottery by K. Wilhelm, with a focus on North African sigillata of the late 2nd to 6th century, which was already published in 2019 as volume 8 of the MBPA. Eleven picture lamps were produced in Italy, 41 lamps and three lamp models were made in North Africa. They offer an overview of the spectrum of forms and decorations of the light fixtures, some of which were produced in large quantities and negotiated over a wide area. The early and mid-imperial examples from Italy are typical examples of these picture lamps. Some of them are of great artistic quality; their mirrors are decorated with motifs related to their light-giving function, but also various mythological scenes. The North African, non-red-tone lamps of the 2nd and 3rd centuries are also typical examples; outstanding is a volute lamp, whose mirror is decorated with a risalit villa and a two-wheeled carriage. So far, there is hardly any concrete evidence of which potteries in Tunisia produced these lamps. Three singular upper parts of plaster matrices, which were used for the production of lamps, also originate from such potteries. Most of the North African lamps are red toned and red engobed, including two figural head lamps. Of great importance are twelve red toned, red engobed (sigillata) lamps produced in central Tunisia, which are among the rare representatives of the early production phase of this genre during the 3rd and first half of the 4th century. They show the richness of variation in both form and decoration during an early experimental phase in the production of these lamps, which ultimately led to the "classical" late antique forms with partly Christian mirror and shoulder decoration motifs. Thus, some older, non-red-tone lamps were taken as models, moulded and modified; in some cases, however, new forms or elements of form and decoration were developed. For the decoration of mirrors, potters from the 3rd to the early 5th century often used decorative motifs molded from the appliquéd sigillata pottery. This already shows the connections to the workshops in Central Tunisia that produced these relief-ornamented sigillata. The X-ray fluorescence analyses of selected lamps in the collection confirm this. According to this, the majority of the early examples come from Henchir el Guellal near Djilma, which was apparently the most important production center in Central Tunisia in the early phase of the red-tone lamps, but individual pieces were produced in Sidi Marzouk Tounsi.
Ines Abspacher (*1984) studied Provincial Roman Archaeology, Classical Archaeology, Late Antiquity and Byzantine Art History at the Universities of Augsburg and Munich from 2007 to 2011. In the summer semester of 2011, she completed her studies at the University of Munich in Provincial Roman Archaeology with the Magister Artium. After having already participated in several excavation projects in Germany and abroad (e.g. in the Roman fort Gheriat el-Garbia, Libya) during her studies, she is now working as co-owner of a specialized company for archaeological excavations mainly in the Augsburg city area. Her research focus is the investigation of the material culture of the Roman Alpine and Danube provinces.