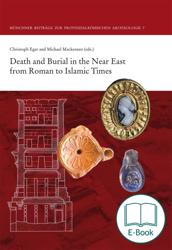 E-book 47.0 MB
This book is based on a German-Arab colloquium held in Amman in September 2013, where current excavation and research results on death and burial from Jordan, Syria, Lebanon and Egypt were presented. For the first time, Arab and Near Eastern scholars were able to discuss the main features and differences in the development of funerary practices of the dead in Roman, Byzantine and Islamic times, mainly based on archaeological sources. It also reports on the processing of old excavations and summary studies on local or regional burial customs. Apart from ten lectures presented in the colloquium, five other contributions by international scholars have been included. Among the more prominent places presented here are Palmyra, Beirut, Petra, Gerasa, Alexandria, Hermupolis and St. Paul's Monastery of Deir el-Bakhît (Thebes-West).

Recent excavation and research results from Jordan, Syria, Lebanon and Egypt on the subject of death and burial from the Roman to the Islamic period are the theme of the seventh volume of the ‘Munich Contributions to Provincial Roman Archaeology’ (Münchner Beiträge zur Provinzialrömischen Archäologie). The essays are based on a German-Arab Conference held in Amman in 2013. For the first time, Arab archaeologists and scientists working in the Arab world across four national borders were able to exchange views on the main features and differences in the development of the death rituals, primarily – but not only – from an archaeological perspective. In addition to reporting current or recent excavations, they involve the processing of old excavations and summary studies on local or regional burial customs. The present volume records ten lectures held in Amman, and also includes five other contributions by international scholars who were unable to attend the Round Table funded by the German Academic Exchange Service (DAAD).
Among the prominent sites mentioned in the volume are the necropolises of Palmyra, which are known for their monumental tombs and were almost completely destroyed during the Syrian civil war. There are two contributions dedicated to them. Less well known are the Hellenistic and Roman necropolises of Alexandria, which are compared with two other sites of necropolises in Roman Egypt located further south. The role of anthropological investigations in modern grave archaeology is illustrated by the tombs in the North Ridge area of Petra. Among the lesser-known sites is the burial ground of Chisphin (Golan), which, however, boasts some exceptional mid Roman grave-goods. With the late antique rock chamber necropolis of Khirbat Yajuz and the hypogeum in the church of Quwaysmah, both in Jordan, two important examples are presented, showing the phenomenon of the early Christian church graves in the region, which has so far barely been worked on. Insights into Egypt’s late-antique, Coptic funeral rituals are provided by the cemeteries in Qarara and Sharuna (Middle Egypt) as well as those of the large St. Paulos monastery in Deir el-Bakhit (Thebes-West) in Upper Egypt. Finally, two contributions deal with issues of Islamic burial customs and death rituals. In addition to the peculiarities of Fatimid grave architecture, the focus here is on modern Islamic burial practices in Jordan.

Christoph Eger
Christoph Eger (* 1967) studied prehistory, classical archaeology and ancient history in Bonn, Mainz and Munich. After completing his doctorate at Munich University (1997), he turned his attention to the study of late antique dress accessories and funerary practices in the Mediterranean. During his time as scholar at the Madrid Department of the German Archaeological Institute (2001-2006), he also dealt with the Visigothic period in the Iberian Peninsula. In 2009 he was promoted to Associate Professor (Privatdozent) in Munich, focussing on North Africa in Late Antiquity. In 2013 he transferred to the Free University of Berlin, where he has taught since then as a associate professor at the Institute for Prehistoric Archaeology. He has been curator at the LVR-RömerMuseum in the LVR-Archaeological Park Xanten since 2015.

Michael Mackensen
Michael Mackensen (*1949) studied Archaeology of the Roman Provinces, Prehistory and Ancient History at Munich, Freiburg and Oxford from 1969 until 1977. After his MA (1974), PhD (1977) and a travel scholarship granted by the German Archaeological Institute/DAI (1977/78) he participated in excavations of the DAI at Carthage (Tunisia) and Resafa (Syria). From 1982 to 1994 he was research assistant at the Bavarian Academy of Sciences conducting excavations in Bavaria (e. g. Nersingen, Kellmünz) and a survey project at El Mahrine (Tunisia). In 1991 he submitted his habilitation thesis and then became Professor for Archaeology of the Roman Provinces at the Ludwig-Maximilians University of Munich in 1994. He carried out various field projects in Bavaria (2001–2007 Burghöfe), Tunisia (1998/99 Chemtou), Egypt (2001/02 Deir el-Bakhît; 2005–2017 Nag al-Hagar) and Libya (2009/10 LMUexcellent-Project limes Tripolitanus). In 1989 he was allocated with the Kurt-Bittel-Preis für Süddeutsche Altertumskunde, in 2010 with the Preis für gute Lehre des Freistaats Bayern and in 2013 with the LMU Lehrinnovationspreis. In March 2015 he was retired.