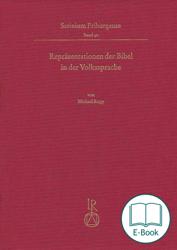 E-book 55.7 MB
The Cistercian abbey Altzelle was, during the Late Middle Ages, one of the most important educational centers in the area of present-day Saxony. The libraries of Altzelle produced significant German-language manuscripts, which this work hopes to analyze with an orientation to the background of the former areas of learning within the convent. According to the analysis, these texts bear witness to an intensified effort at instruction, which, with respect to annunciation and catechesis strongly reflects on German as a vernacular language. In this way the study provides a window into the arrangement of vernacular instruction and education in the first decades of the 15th century.

The Cistercian abbey Altzelle was also well known in the Late Middle Ages as the center for research and education, above all through its comprehensive library, the items of which were continuously collected by a number of scholars in the convent. Among the extant manuscripts are–exceptionally, for a Cistercian abbey– several manuscripts in the vernacular, which, for the most part, either were produced or made their way to Altzelle during the 15th century. Several codices are analyzed by this work with respect to the contemporary areas of scholarship within the convent. According to this analysis, these codices bear witness to an intensified effort at instruction, which, with respect to annunciation and catechesis strongly reflects on German as a vernacular language. These include, among other things, a bilingual collection of psalms, a book of the gospels, and a collection of sermons and catechistic texts, which together inform our view of the arrangement of instruction in the vernacular at the abbey during the first decades of the 15th century and the education one was likely to receive there with respect to the catechesis and annunciation.