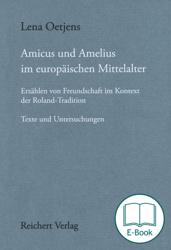 E-book 21.8 MB
For the Middle Ages Amicus and Amelius were the epitome of friendship. Narratives of the two friends however not only touch upon medieval ideals of friendship but also on conceptions of loyality within the Christian faith as well as on the various links between friendship and kinship.
Lena Oetjens offers an edition of the three major Latin texts in this tradition as well as translations in German. The commentary investigates the narratives’ entanglement with textual traditions usually associated with Roland, Charlemagne and the holy Jacobus. In addition, the study traces multilingual aspects of the texts’ reception until Konrad`s ›Engelhart‹.

Amicus and Amelius were not just any pair of friends: The Middle Ages regarded them as saints, and they were seen as the epitome of friendship. Narratives of their lives spread from eleventh-century France to the rest of Europe, where they stayed popular well into the fifteenth century. Variants of the story of Amicus and Amelius all detail the ways in which the friends depend on one another in moments of crisis, and how they die together in Mortara in Lombardy. Ideal as their friendship might appear at first sight however, the various texts narrating their story treat them from radically different perspectives when it comes to the handling of delicate ethical matters: Amelius sacrifices his children to cure Amicus from leprosy, while Amicus assumes Amelius’s identity to win a judicial fight, killing Amelius’s opponent in a duel. The friends look identical, meaning their role-swapping goes unnoticed. Somewhat problematically, it is the innocence of stand-in duelist Amicus that helps Amelius win his case; Amelius is guilty since he had an affair with the monarch’s daughter. But Amelius’s opponent, Hardericus, is clearly the wrong sort of friend: a jealous faker of friendship who had used Amelius’s trust only to report him to the king. Amelius and Amicus’s friendship survives Hardericus’s betrayal. In the end, both friends are well, and thanks to a miracle, even the children stay alive. Later the two friends die in battle and are laid to rest in the same splendid tomb.
Lena Oetjens presents a bilingual edition of the three Latin versions of the Amicus and Amelius tradition (translation in German). Her commentary contextualizes the texts’ representations of friendship, investigating their theological aspects in particular. Oetjens shows that the Song of Roland is central to the understanding of the Latin texts; Roland’s martyrdom links the Amicus and Amelius narratives with the idea of a ‘holy war’ legitimized by God. Yet the Song of Roland provides but one of the relevant contexts for Amicus and Amelius. The study shows further intertextual encounters between Amicus and Amelius with the pious pilgrims of the ›Jakobsbrüder‹ as well as with the brave knights in the ›Chanson d’Ami et Ami‹ or Konrad`s ›Engelhart‹. French and German adaptations of the material include or omit aspects of the plot which highlight the question of loyality either in an epic or a religious way. Oetjens thus carefully reconstructs the tradition using a wide variety of texts and contexts, providing an overview of the relevant texts from the twelfth to the fifteenth centuries, including historiographical, pastoral, and hagiographical traditions in Latin as well as various vernacular languages.

Lena Oetjens, born 1983, studied German linguistics, literary studies and psychology at the University of Braunschweig as well as Medieval Latin at the University of Erlangen. She joined the German department of the University of Zurich in 2011. Her research interests include the connections between Latin and vernacular literature and manuscript culture. Currently she is fellow at the DFG-funded interdisciplinary Berlin research group FOR 2305 “Discursivations of the New. Tradition and Innovation in Medieval and Early Modern Texts”, where she is working on a study on innovation in medieval discourses of love.