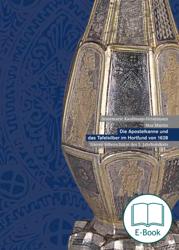 E-book 37.7 MB
Two extraordinary late Roman silver finds were discovered in the same area close to the bank of the Mosel at Trier: in 1992 a splendid silver jug with decoration depicting the Apostles and nearly 400 years earlier, in 1628, a huge hoard of table silver.
The Apostle jug is among the rare pieces of evidence testifying to late Roman table ware illustrating Christian subjects. The iconographic scheme with Apostles in dialogue goes back to early Christian sarcophagi. The eight-sided jug with gilding and niello decoration survived complete with its lid and handle and is notable for its very slender proportions. Its shape, decoration and function are analysed in comparison to other silver jugs. Technical and metallurgical examination give fascinating results as to the manufacturing process and the composition of the various parts of this masterpiece of ancient toreutics. The lost silver hoard from 1628 was the biggest hoard of its kind yet known. It weighed 114.5 kg in total and consisted of about fifty pieces of table ware, which were melted down shortly after their discovery. The surviving 17th-century descriptions and several comparisons with similar late Roman finds allow a pictorial reconstruction of the find and a proposed date of the second quarter of the 5th century. The proximity of the 1628 and 1992 findspots of the lost treasure and the jug as well as the assumption that the silver objects were of the same date suggest that both finds once belonged to one and the same complex of table silver. If so, the silver jug would be the only surviving object of this remarkable treasure which comprised, in a typical late
Antique manner, vessels with traditional mythological and new Christian decoration. The publication on the late Roman silver from Trier provides new insights into the first half of the 5th century, a little known period of its history.