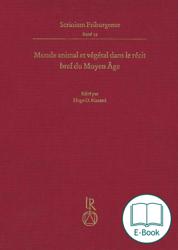 E-book 3.8 MB
A set of studies that offers a global vision of the literary representations of the animal and plant world in the brief narratives of the Middle Ages (fable, example, proverb, lais, etc.). The volume focuses in particular on Spanish literature, but it also includes other Romance languages ​​and Latin literature.

This volume offers 16 contributions that study representations of the animal world and nature in short narratives of the Middle Ages. The volume aims to consider these two different and subsidiary fields of the medieval world in combination. It challenges the tendency, hitherto dominant, to study the animal world in isolated and focused forms, and the plant world as a simple grounding for narrative situations. By contrast, this volume focuses on the role played by animals and nature in the development of short narrative forms. How is the observation of nature combined in the various short forms? What was the collaboration of these elements in the evolution of these forms? What are the links and differences between the fable, the story that places animals in the foreground, and other literary forms that privilege nature? These are some of the questions that are answered in the various contributions. The main focus is Spanish literature, but the volume also contains reflections on other Romance languages. The Calila e Dimna, the Sindibad, the Conde Lucanor, the fables of Eudes de Chériton, the Decameron and the works of Chrétien de Troyes all appear in the pages of this book.