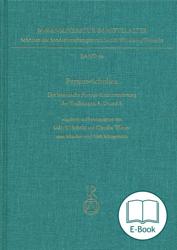 E-book 8.3 MB
The Latin medieval commentaries of the Roman satirist Persius (AD 34- 62), gathered from obscure ancient material, are published here for the first time in critical editions of 3 of the 5 anonymous traditions. This project, serving also as a model for other ancient authors, can show the specific reception of a Roman author in different epochs, regions and centres of education, and supply a better basis for the reconstruction of the ancient and early medieval commentaries of Persius.
The small corpus of 6 poems of the Roman satirist Persius (AD 34- 62) written during the reign of the emperor Nero was immediately after its publication an enormous success: in ancient and medieval times Persius was a higly esteemed author, read also in the schools and ranked with the “golden authors”. Therefore it is not surprising that his text was often copied and commented on – for those educated and interested in literature and also for school purposes. The ancient commentaries are lost and only at rare points recoverable. But between the 9th and the 16th centuries we have about 650 manuscripts of the text of Persius and many commentaries on it from all over Europe: 35 commentaries composed by single scholars; in 74 manuscripts there exist anonymous school commentaries, which by some tests could be divided into 5 traditions (tradition A to E). This rich material which is very important for the history of education and the transfer of knowledge, is available up to now only in an edition of the text of 4 early manuscripts of the so-called tradition A: now for the first time a complete critical edition of the traditions A, D and E is published. Whereas the scientific interest in the past was focused on the ancient commentaries to Persius, or what was taken for ancient scholia of Persius, now we shall have a diversified area of reseach fields: it will be possible to study the medieval reception of Persius differentiated into particular epochs and centres of education; or to seek an answer to the question of what in this medieval material is of ancient origin; or we can now clarify the relationship and interaction between scholars’ commentaries and school explanations. Since we do not have such continous documentation for any another ancient author, this project might also serve as a model and example for other transmissions of ancient literature. This book is important not only for classical philologists and medieval Latinists, but also for scholars of philologies and cultural studies which are interested in the process of medieval european education and reception of literature or in Nachleben, or in this material as a starting point for further study in the development of European literature and civilizations.
Udo W. Scholz
1957–62 educated in Latin, Greek and German Philology and History at the Universities of Munich and Erlangen; 1963 PhD; 1969 Associate Prof. at the Univ. of Erlangen-Nürnberg, 1974 full Professor and Head of the Departmant of Classical Philology at the Univ. of Würzburg; 1996 PhD h.c. of the Univ. of Caen/France; since 2007 retired.
Main fields of research: Latin literature of the Republican and Augustan period, Roman historiography, Roman satire, Roman religion.


Claudia Wiener
is professor of classics (latin literature) at Ludwig-Maximilians-Universität of Munich; in 1983-1990 she was a student of classics and german literature at Julius-Maximilians-Universität Würzburg and Università di studi di Siena; in 1993-2000 associate professor at Würzburg; degrees obtained: M.A. (1988), Dr. phil. (1994), Dr. habil. (2003); research interests: relations between philosophy, arts and literature in silver latin authors, transmission of text, neolatin literature.