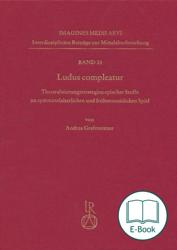 E-book 5.0 MB
This study concentrates on strategies of the theatralization of epic motifs in the late medieval and early modern play in combination with the question of the advantages which lie in a dramatic realization compared to an epic or lyric text. The study comprises the analysis of shrovetide plays with Arthurian motifs, the Neidhart plays, and the heroic epic (e.g. the play of the ‘Wunderer’, the ‘Tirolean Reckenspiel’, the play of the ‘Hürnen Sewfriedt’ by Hans Sachs, and Jakob Ayrer’s ‘Wolfdietrich’ trilogy. The permanent comparison with religious plays allows us to obtain profiles of the performativity of both profane and religious plays. These profiles reveal ways of performing central aspects or scenes in both genres. Furthermore, an analysis of sacred plays at the same time and their impact on the spectators is also given, because the theatralization of biblical-epic motifs is supposed to be a subject of performative rules in analogy to those of the profane play. On the whole, the medieval plays – beyond the mere text – are seen as an outstanding event of cultural life in medieval cities.

This study concentrates on strategies of the theatralization of epic motifs in the late medieval and early modern play. It comprises the analysis of shrovetide plays with Arthurian themes, the Neidhart plays, and the heroic epic (e.g. the play of the ‘Wunderer’, the ‘Tirolean Reckenspiel’, the play of the ‘Hürnen Sewfriedt’ by Hans Sachs, and Jakob Ayrer’s ‘Wolfdietrich’-trilogy). The permanent comparison with religious plays allows obtaining profiles of the performativity of both profane and religious plays. These profiles reveal ways of performing central aspects or scenes in both genres. A good example is the dramatic realization of the Arthurian motifs where a view on performing complaint of figures in sacred plays can deliver hints for performing complaints of those figures in profane plays. Hence, the shrovetide plays adopt the traditional motifs, but they use them for a different purpose, namely, to produce potentially comical sequences. The performance of the ‘Veilchenschwank’ in five medieval plays integrates the iconography of the Neidhart tradition. A collation of profane as well as religious plays broadens the view of the importance of for example fecal humor which is very much strengthened in the Neidhart plays. Each of the Neidhart plays focuses on different aims appending to the several sites of performances and the different functionalization of the play. Iconographic documents such as wood carving can also be helpful to obtain performance information for the play of the ‘Wunderer’ and the ‘Tirolean Reckenspiel’. A possible moralic and didactic functionalization of the heroic epic is manifest in the ‘Siegfriedspiel’ by Hans Sachs. His contribution to the process of literarization can be clearly seen in view of the cultural and social conditions of premodern Nuremberg. Without a doubt, Jakob Ayrer is still marginalized in academic research. But the analysis of his reception of the ‘Ortnit’/‘Wolfdietrich’-epics shows impressive theatrical innovation under the influence of the English Comedians and the thoughtful re-organization of sindividual blocks of the ‘print of heroes’ collection’ (‘Gedrucktes Heldenbuch’) of 1590 for dramatic purposes.
The innovative potential of this book is the constant collation of both genres: the profane and the religious play. Despite the disregard by the earlier scholary research, the focus on the alternating performative strategies shows the underused possibilities of the hints of performance strategies for the plays beyond the single text document.

born 02/24/1970, Study of German Studies at the universities of Bamberg and Liège, 2004 Ph.D (‘Der Leich Walthers von der Vogelweide’), 2011 habilitation.
Current status: Teaching Assistant at the Chair of German Philology of the Middle Ages at the Otto-Friedrich-University of Bamberg.