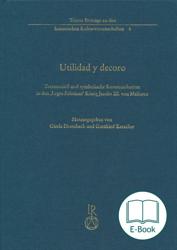 E-book 22.8 MB
The theme of the conference proceedings is the question, whether in the 14th century in one of the Catalan kingdoms there has been a first European ceremony or whether it is a hybrid of law book and rules of the court. Thus, the leges palatinae give an insight into the living conditions and the inner structures of the society at court, whereby the illustration of the rich text characterises the manuscript as an important European contemporary document.

The leges palatinae, which is discussed in the conference proceedings, is a first-rate illuminated manuscript. Its roots and traditions are still unknown, so that the allocation of the texts and miniatures as well as the richly adorned initials has seemed difficult if not impossible so far. This publication is the first to take steps to come closer to the meaning of the manuscript. To proceed from the assumption that it could be a law book, we now pose the question of why the king would have the book designed in the manner of court rules. The sumptuous manuscript shows similarities to future ceremony books – among others – which for their part were not only to regulate life on court itself but also held concrete instructions. The characteristic style of the texts and illustrations clearly indicates that it was not only about the ‘what’ but more strongly about the ‘how’. The agency of the nobles on the rich royal court is therefore reminiscent of a sociogram of how to treat each other at court, what you were allowed to do and what you were not – but, above all, actions were accurately characterised.
In this way, we not only gain a good impression of the organisation of the royal court and the manner of how the king knew to bind the nobles. What is more, the interpretation of text and image unfold the ideal of society at court in the 14th century and the following period, as the aftermaths of the leges palatinae are also a subject of discussion.
Whether these ties, whose ends have been those actions and regulations we know from reports about the court of King Louis XIV of France, have been passed-on legal norms or take-overs from Byzantine ceremony, is to be considered as well as their visualisation – in the historical context of earlier similar manuscripts, of course. The fact that a ruler, some years prior to his fall from power and his death, carries a manuscript on the run, which he gave the (French) king when requesting help against the Aragonese cousin, seems to be historically unique. It emphasises once more the importance of the Catalan manuscript that was to become the basis of Burgundian ceremony and whose provenance has recently been proved by Ulrike Bauer-Eberhardt.

Professor Gisela Drossbach
obtained her doctorate in 1993 with a thesis about the clergy Konrad von Megenberg from Regensburg and habilitated with a thesis about the Roman hospital of Santo Spirito in Sassia and its illuminated rules of the order. Further stages in her research are Medieval and Early Modern statutes and the genesis of pontifical decretal law. She teaches Bavarian and Swabian regional history/Middle Ages at University Augsburg.


Professor Gottfried Kerscher
obtained his doctorate in 1985, did research in Florence, Rome, Avignon, Barcelona, and on the Balearic Islands. His book about Late Medieval palace building in France, Spain, and Italy, from the year 2000, exposed him to the prime of Majorcan palace architecture and the ceremony taking place inside. He teaches art history of the Middle Ages at University Trier.