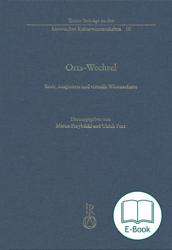 E-book 16.9 MB
Focusing on the concept of ’changing places’, the essays in this anthology discuss processes of constitution, stabilization, and transformation of ’worlds of knowledge‘, covering a wide range of thematic and historical perspectives from the European Middle Ages to the 21st century. Objects as eclectic as church buildings, panel paintings, etchings, pieces of narrative and dramatic literature, motion pictures and TV genres serve to illustrate how access to as well as the interpretation of ’stocks of knowledge‘ is determined by spatial orders and their oscillations.

The concept of ‘changing places‘ is an important aspect of constitution, stabilization but also transformation of ‘worlds of knowledge‘. The essays of this anthology covering a wide range of thematic and historical perspectives from the European Middle Ages to the 21st century and discuss their correlations (inter-)disciplinary from the science of history over the philology to art and film studies. These perspectives are described and analyzed within three operative guiding principles – ‘place‘, ‘order‘ and ‘oscillation‘. ‘Place‘ is understood to mean the spatial concretion as well as an imaginable dimension, ‘order‘ is comprehended as ideal systematization of spaces and stocks of knowledge and ‘oscillation‘ is defined as an dynamic aspect of transgeneral passing and obliteration of knowledge. Important questions focus on space-knowledge, the proportion of fragmentation and isolation, the relation between horror vacui and beguilement as well as the relationship between spaces of art and artificial spaces. The concrete offset of change of places and ‚worlds of knowledge‘, on which the essays of this anthology are focused, broach the issue of real places like the Roman Nuremberg, the cathedral of Trier, Greenland and the south pole. They also regard TV-(counter) worlds of the British Empire and sites of crime in political crime thrillers as well as fictional spaces and ordo-imagination in Arthurian romance and anachronistically Marian apparitions in the theater of the Weimar classicism. Likewise they focus on art which is inspired by Dante’s ‘inferno‘, the spaces for damned people. All these cases illustrate how access to as well as the interpretation of ‘stocks of knowledge‘ in their stabilization but also in their changes is determined by spatial orders and their oscillations.