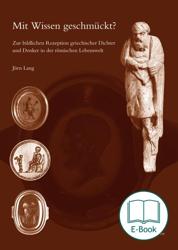 E-book 35.7 MB
The relations between Greek and Roman culture constituted a continuous exchange since the Roman expansion into the Eastern Mediterranean area in the second century BC. One aspect of this phenomenon is the reception of Greek education and its visual presence in Roman world, which moved between contentual integration and amateurish dabbling.
The main focus of this study is on depictions en miniature, among which carved stones play a pre-eminent role. They are analyzed under iconographic and typological as well as historico-cultural aspects. In this context, the question of their qualities as a cultural expression of certain notions of Greek education in a graphic transformation of the discourse around paideia is of central importance.

Since the 2nd century BC the contact between Greek and Roman culture can be described as one of mutual exchange. Reception of Greek education and its visual presence in the Roman culture forms one aspect of this complex relationship and is the focus of this publication. Unlike past publications, which centred life-sized marble-sculptures of Greek poets and thinkers, this publication comprehensively analyses examples of the “minor arts” like engraved gems, tableware, oil lamps, appliques on furniture as well as rounded effigies, which are smaller than life-size.
These are evaluated regarding their suitability as a form of expression in perception of Greek education. This publication examines more than 700 depictions of Greek poets and thinkers from Roman everyday life. It therefore combines a material-oriented analysis of the quantitative most significant category of engraved gems with a function-oriented analysis of smaller artworks on the whole.
Methodically the analysis of the material is divided into three steps. Following an explanation of the methodical approach and a historical introduction, the first material-oriented step consists of an iconographic, typological and functional examination of the negraved gems. The publication therefore provides a comprehensive photographic documentation of depictions of Greek poets and thinkers. Subsequently, a contrastive follow up of other manifestations is presented, through which the depictions were visually and functionally embedded into Roman daily routine and could be received in everyday situations. In a third step the material becomes subject to cultural and historical issues based on previous gained understanding. The discussion of the relationship between Greek education and the Roman way of living was heretofore dominated by literary sources. This literary based discussion can be diversified and strengthened for further discourse by considering the culture of Roman everyday life. The various groups of materials took over different functions in everyday life and allow therefore for an analysis of reception of Greek education within context of its perception in different social situations.
At the same time the simultaneous consideration of the archaeological remains illustrates the divergence between visual and literary testaments. It thus, encompasses the educational discourse in its manifold refractions and varied semantic layers between the permeation of its content and the formulation of a claim to Greek education.