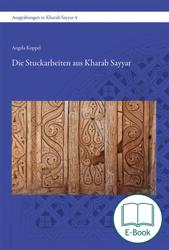 E-book 90.6 MB
The work of the German-Syrian excavation team in Kharab Sayyar focuses on the exploration of an extensive Islamic urban settlement from the 9th century AD, whose importance for the reconstruction of the town’s original appearance, especially of the artistic development (stucco decorations, mural paintings), became apparent even after the first excavation campaigns. This volume on Islamic ceramic introduces the series „Deutsch-Syrische Ausgrabungen im islamischen Kharab Sayyar“ (KHS); other volumes will focus on individual excavation sectors and on the findings. A manuscript for the publication on the so-called „Great House“ (sector E) by Michael Würz is already at hand, a study by Angela Koppel on the stucco decorations in the „Great House“ and the Mosque is under preparation. Publications of the findings around the Great Mosque (Imad Mussa, 2012), the Bath (Natascha Matyschok, 2013), and an evaluation of the examination of hydraulic engineering and water management (Michael Würz, 2013) are intended to follow.