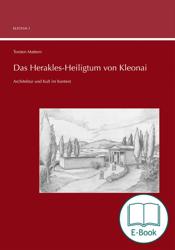 E-book 7.3 MB
Kleonai’s sanctuary of Herakles is located approximately 500 metres southwest of the ancient city. It consists of a tetrastyle and prostyle doric temple and an opposing peribolos. Both date back to the 2nd century BC. The reconstruction of the temple, whose cult figure is partly preserved, is widely reliable. Its design is very unusual due to its widening of the middle intercolumniation and the inclusion of the altar into the crepidoma. In this volume, the architectural result of the ensemble is presented, reconstructed, and contextualized. The knowledge of the history of the city of Kleonai is essential for the understanding of its time of origin and the choice of the cult. For this reason, its history is studied on the basis of historical, epigraphic and archaeological sources. For the contextualization of the architectural history, special attention is paid to the characteristics of the temple, for instance, ground plan typologies or the development of the doric order.
The Heracles temple is an excellent example for the architecture of smaller cities beyond the great cultural centres. Those local buildings were more independent from the great traditions and can thus serve as a corrective for our image of the architectural history in antiquity.
Kleonai is an ancient city on the Peloponnese, south of Corinth. The city was founder and host of the pan-hellenic games of Nemea unil the time when Argos took them over. In the series the results of the archaeological research on the hitherto largely unknown city are presented.