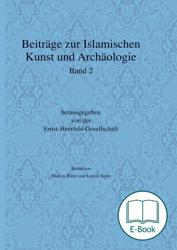 The contributions cover three greater regions and periods, starting with research on the 8th-13th centuries in Islamic Spain. Antonio Pena (Barcelona) places the re-use of ancient „spolia“ in the context of caliphal representation [Spolia Serving Power: The Testimony of the Great Mosque of Córdoba]. Magdalena Valor (Sevilla) sketches the urban building history of the Almohad centre [Sevilla, Capital of the Almohads in al-Andalus]. Tobias Rütenik (Berlin) demonstrates how to deduce re-used Islamic sacred buildings from Christian ones [Transformations of Mosques to Churches at Toledo From the Perspective of Building Archaeology]. Klaus Graf (Saarbrücken) presents a typology of pottery from archaeological finds [The Islamic Pottery of Cuncos, Estremadura].

Iran and Central Asia in the 12th to 15th centuries form a second focus. Lorenz Korn (Bamberg) introduces a scarcely-known domed mosque datable to the post-Seljuq period in Eastern Iran [The Masjid-i Gunbad at Sangan-i Pa’in (Khurasan/Iran): Architecture, Decoration, and Inscriptions]. Markus Ritter (Zurich) discusses, based on new reasearch, a unique textile with Arab inscriptions [Art With a Message: The cloth of Silk and Gold for the Ilkhan Abu Sa’id of Iran (Burial Garment of Rudolph IV in Vienna) - Reconstruction, Type, Medium of Representation]. Márta Járó (Budapest) examines a technical aspect in the cloth [Late Medieval Technology of Craft: The Metal Thread in the Vienna Cloth for Abu Sa’id]. Yuka Kadoi (Chicago) poses for the Timurid period the question of flags in pre-modern Islamic states (On the Timurid Flag).

Art for Europe and Islamic art in Europe constitute the third part, covering the 15th to 20th centuries. Barbara Karl (Vienna) looks into luxury objects from India as products for trade (Art for the International Market: Three Mother-of-Pearl Objects from Sixteenth-Century Gujarat in Early Modern European Collections). Iván Szántó (Budapest) raises attention to Eastern European parallels of Europeanizing Safavid painting in Iran (Monumental Art East of the Baroque) and to the reception of Arab forms in Hungary (Mamluk Influences in Hungarian Art). Martin Gussone (Berlin) analyzes and interprets the eclecticism of a German mosque from 1915 [The Mosque in the Half-Moon-Camp at Wünsdorf Between Jihad Propganda and Orientalism].


Markus Ritter is Assistant Professor for the History of Islamic Art at the University of Zurich in Switzerland. He studied in Bamberg, Cairo and Teheran, and received his PhD in 2003 from the University of Bamberg. He taught at different universities and was a researcher in the Institute of Iranian Studies of the Austrian Academy of Sciences in Vienna. His areas of research include the arts and architecture in Iran and in Early Islamic Palestine.

Lorenz Korn is Professor for Islamic Art History at the University of Bamberg. He studied in Tübingen and Oxford, received his PhD in 1999 from the University of Tübingen and was Aga Khan postdoctoral fellow at Harvard in 1999-2000. His areas of research include architecture and architectural decoration in the central Islamic lands (10th-16th century), Iranian metalwork, and epigraphy.