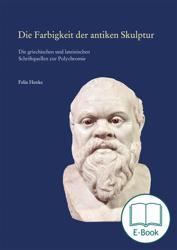 E-book 14.9 MB
As a contribution to the archaeological research on polychromy, this study analyses the written sources on the colouration of ancient sculpture. It addresses all types of materials, from clay to chryselephantine works. The texts refer not only to techniques of representation and conservation procedures, but in particular to the artists‘ intentions behind colouration and the meaning attributed to it by the ancient viewer.
This analysis of literary and epigraphical sources contributes to the current research on ancient polychromy and complements the archaeological and scientific studies both in breadth and depth: on the one hand, it can provide information on lost works and aspects of colour that cannot be reconstructed by other means, on the other hand, it can make dimensions like meaning and interpretation of colour accessible. In doing this, it can draw upon extensive collection and intensive discussion of the sources primarily during the 19th century. Not only has a detailed and comprehensive survey and synthesis of the material been missing until now, but also the separate interpretations had to be revised in many cases: progress in text edition as well as a large number of misinterpretations and overinterpretations made a critical review of the material necessary.

The texts offer insight into very diverse aspects of colouration. For example, they provide information on types like the monochrome red cult images– from the Greek Dionysos to simple Roman statues of Priapus and the state god Jupiter. The appearance of monumental chryselephantine images with their excessive material polychromy can also only be grasped with the help of written sources. Other texts mention, for example, procedures for the conservation of a statue’s surface design; here, a reinterpretation of the sources on ‚ganosis‘ was especially necessary.

The texts also offer insight into the motivations behind the use of specific colorants: besides the ideal of realism and the pleasure of material splendour, for example, gilding appears as a manifestation of pious veneration for a depicted divinity or the work of art itself. Especially uncommon colourations frequently prompted discussions on technique and semantics among intellectuals; it thus appears that the omnipresent colour was not only seen as decoration, but was often also the main focus of the discourse. Even lavish polychromy was always viewed as positive, and an appealing design could in turn be used to define perfect human beauty. Lack of colour, on the other hand, was viewed, like corrosion, as damage and, in cult statues, as a sign of neglect of the god. Various indications, however, suggest that stone was not always completely covered with paint: especially in the case of female statues, the colour effect of white marble appears to have been used as a part of the colour palette, in accordance with the ancient beauty ideal of light skin.

Other aspects treated are, for example, the principles applied in colouration, from lifelike mimesis to metaphoric allusion, technical questions like that of the role of encaustic painting or the use of alloys for sculptural polychromy, or the self-perception of the artists involved.