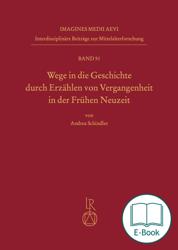 E-book 10.6 MB
The examination of historical images in selected works from the 16th century offers a fundamental insight into how the Early Modern Period related to the past, especially the High Middle Ages; it shows, among other things, the coexistence of both the continuation of tradition lines as well as deliberate breaks with tradition and the resulting 'new beginnings'. It contains the new editions of the Historia of Friedrich Barbarossa as well as of Georg Thym's didactic poem Thedel von Wallmoden, which are therefore available for the first time as basic material for further research in a critical edition, taking all the surviving prints into account.
The Early Modern Period is considered a time of upheaval and new beginnings; the memory of the past and the preoccupation with history in this period therefore offer an exciting object of investigation. On that basis can be analysed whether the past is actually perceived as something to be overcome for this 'modern period', how history is retold and also instrumentalised. Three works from the 16th century, each combining history and stories in its own way, will be examined: the Historia of Friedrich Barbarossa (first print 1519), the Barbarossa Vita by Johannes Adelphus Muling (first print 1520) and the didactic poem Thedel von Wallmoden by Georg Thym (first print 1558). The analysis shows that in various genre and creation contexts, depending on the particular present, literary sources and texts, historical persons and events are assembled, synchronized and classified as 'true', either consciously or unconsciously neglecting the chronological truth of facts. One aim of this is to construct a glorious past for a family (Thedel von Wallmoden) or for a 'national' group (Barbarossa) or to instrumentalise the history thus constructed didactically, whereby the relationship between 'fact' and 'fiction' is quite different in each case. The High Middle Ages (12th century), which are stylised as a kind of Golden Age, are used in this context. Thus, in the 16th century, the past - the Middle Ages - is not conceived as a closed 'pre-time', but the present is understood as a linear continuation of the past; the authors do not pursue medievalism in the contemporary sense. The mythogenetic process (P. Burke) - the detachment of the narrative from history - has in some cases already progressed so far that 'memory implants' (J. Fried) are also created, i.e. the narratives of events not actually having happened, but which find their way into history, are integrated and perceived as 'true' in historiography. A central part of the postdoctoral thesis are the new critical editions of the Historia of Friedrich Barbarossa and Georg Thyms Thedel von Wallmoden, which after the editions of the 19th century are thus made accessible for the first time, taking into account all the surviving printed works.
Born in 1974; studied German language and literature, theatre studies and music education at the universities of Erlangen and Bamberg; doctorate in 2009; since 2017 member of the academic staff at Saarland University. Main areas of research: courtly literature of the High Middle Ages, medievalism in modern culture.
This series, which will comprise doctoral and professorial dissertations and other monographs as well as collective volumes, aims at highlighting and promoting interdisciplinarity in Medieval Studies even more than is currently the case. Works from all branches of Medieval Studies will be accepted, provided they emphasise the aspect of interdisciplinarity, i.e. they attempt to transgress the boundaries of any single subject.