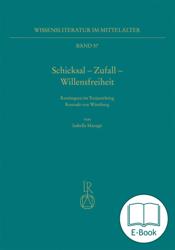 E-book 1.3 MB
The tale of the fall of Troy is - and was already in the Middle Ages - a popular and oft-told story, and the tragic end of the war between Greeks and Trojans can be considered anchored in cultural memory. In his 13th century novel, however, Konrad von Würzburg repeatedly tells this story in a way that is open to the future, for example by having Fortuna steer the fate of characters in initially unexpected directions or by having protagonists weigh up important decisions in long monologues. This exciting form of literary reflection on the uncertainty of the future (or contingency) is the subject of this study on the Trojan War.