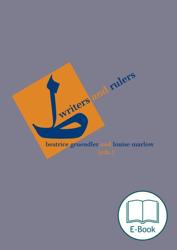 Perspectives on Their Relationship from Abbasid to Safavid Times

E-book 54.5 MB
Nine essays explore the ways in which individual Arabic and Persian authors between the 9th and 17th centuries (with examples drawn from the Abbasid to the Safavid dynasties) chose rulers and other political leaders as the recipients for their writings, instrumentalizing or recreating literary traditions in order to forge and establish the status of an authority for themselves, to fulfill their own requirements and aspirations, and finally to meet the demands of their addressees.

Literature in the pre-modern Near East was an important conduit for the conveyance of didactic, ethical, and ideological concerns to rulers and other political leaders, and at the same time it served to secure the subsistence, status, and protection of authors. To counterbalance the greater power of their royal patrons, writers frequently invested themselves with the authority of religious law and ethical ideals, and they touted the value and currency of their own art. In effect, the author crafted a “contract” that bound the ruler to a specific portrayal of himself. On occasion, the writer imparted direct criticism of his addressee, in the form of the curse; sometimes he commented indirectly, through the use of historical example or mundus inversus satire. To accomplish these ends, writers bent existing literary genres (including lament, praise qaside, quatrain, ghazal, epistle, ahkam sultaniyya, historiography, mirror for princes, and shadow play) to their purposes, or even recreated them. Authors stood to gain not only material benefits but also present fame and a place in the literary tradition, while rulers received the opportunity for public display of their culture and largesse, emblems of good government, and could also hope to secure lasting memory for themselves and their houses. Nine essays explore these issues in distinct historical settings that range from the ninth to the seventeenth centuries (Abbasid to Safavid dynasties), and span the geographical area between Egypt and Iran.

The present work aims to draw attention to the prominent and widespread public role of Arabic and Persian literature. Through a well-distributed set of articles, the volume explores in depth the impact of such literature in specific milieux, and across generic, regional, and dynastic boundaries. Rather than attempting to offer a comprehensive treatment of the subject (indeed, no such study yet exists), this collection is intended to offer a series of detailed studies for the specialist in Arabic and Iranian literature, and at the same time to introduce to a wider audience the relationship and relevance of Arabic and Persian literature to political leadership. A general introduction and two extensive indices provide easy access to the non-specialist.

Beatrice Gruendler (Ph.D. Harvard University 1995) is Professor of Arabic in the Department of Near Eastern Languages and Civilizations at Yale University. Her three areas of research over the years have been Arabic script, medieval Arabic poetry with its social context, and the integration of modern literary theory into the study of Near Eastern literatures. Besides numerous articles, her major publications include „The Development of the Arabic Scripts: From the Nabatean Era to the First Islamic Century“, Harvard Semitic Studies 43 (Atlanta: Scholars Press, 1993); „Medieval Arabic Praise Poetry: Ibn al-Rûmî and the Patron’s Redemption“ (London: RoutledgeCurzon, 2003); and, co-edited with Verena Klemm, „Understanding Near Eastern Literatures: A Spectrum of Interdisciplinary Approaches“, Literaturen im Kontext: Arabisch - Persisch - Türkisch 1 (Wiesbaden: Reichert, 2000).

Louise Marlow (Ph.D. Princeton University, 1987) is currently Professor of Religion and Director of Middle Eastern Studies at Wellesley College. Her research falls in the fields of medieval Islamic intellectual and literary history, and she is particularly concerned with the study of mirrors for princes written in Arabic and Persian. Her publications include „Hierarchy and Egalitarianism in Islamic Thought“ (Cambridge: Cambridge University Press, 1997), and „Kings, Prophets and the `Ulamâ’ in Mediaeval Islamic Advice Literature“, Studia Islamica 81 (1995), 101-20. She is currently engaged in a study of literary works produced in Khurasan during the tenth and eleventh centuries in Arabic and Persian, and she is preparing a translation of the NasîHat al-mulûk of Pseudo-Mâwardî.
Literatures in Context is a peer-reviewed book series devoted to Near Eastern and North African literatures. The editors want the title of the series to be understood programmatically. They presuppose a concept of world literature that includes Near Eastern and North African literatures. What is more, they assume that literatures are in many ways marked by intertextuality, that they constitute readings of extremely diverse earlier texts, and that they are posited within a field of tensions, much broader than their respective national language. For the earlier eras of Near Eastern and North African literatures, this field of tensions geographically covers the regions of the Southern and Eastern Mediterranean and Asia Minor. In modern times, it has become a space of interaction that has long since included “global” Western literatures (and realities). This does not imply that the modern Near Eastern and North African literatures have severed themselves from their predecessors. Instead it is precisely the tension between different sets of references in modern Near Eastern and North African literatures, or their “local historical context”, which is a great part of their attraction, that remains a crucial field of research for the modern scholar.