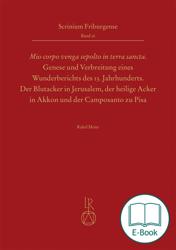 E-book 28.4 MB
The book is about the emergence and spread of the miracle report about a supernaturally rapid decomposition of corpses at specific burial sites, so-called holy fields (Campus Sanctus). How is it that in the last third of the 13th century this belief appears at about the same time in the most diverse places in the Mediterranean? The aim of the study was to link the port cities of Acre and Pisa, both places with very early evidence of Holy Fields, with the place of origin of the belief, the Akeldama (blood field) in Jerusalem. With the help of detailed source studies and an interdisciplinary approach, it was possible to work out the circumstances and preconditions for the emergence of the miracle report. Building on the results and possible theses, the frescoes of the Camposanto in Pisa are subjected to a re-reading and in particular the death allegory attributed to Buonamico Buffalmacco is re-evaluated.
Anyone dealing with the world-famous Pisan Camposanto will immediately come across the Terra Santa legend. It states that the soil of the city cemetery founded in 1278 originates from the Holy Land and possesses the miraculous property of completely decomposing corpses within a few days. According to medieval sources, the terra santa comes from Jerusalem, namely from the Akeldama, the field of blood – a place far less well known. But even here, too, the same belief in the rapid decomposition of corpses has been circulating since the High Middle Ages. Rahel Meier delivers groundbreaking results on both aspects of the Pisan terra santa legend, the place of origin of the earth as well as the belief in rapid decomposition. By deconstructing the traditional assumption about the location of the memorial site in Jerusalem, the author provides a completely new basis for our understanding of the Akeldama. In turn, this allows for a plausible hypothesis, how the idea of the rapid decomposition of corpses arose. The results in the first part of Meier's investigation therefore enable a new and expanded understanding of Jerusalem’s cemetery for the foreigners and the sacred topography of the Holy City.
A more precise interpretation of the Camposanto at Pisa is only possible after a comprehensive examination of the phenomenon of the Mediterranean dissemination of the Akeldama's "replicas" or material reifications in the High and Late Middle Ages.

The second part therefore concentrates on this phenomenon by examining the spread of the legend and the establishment of sacred fields in the late 13th century. Rahel Meier makes clear that the origin of the local terra santa-legend in Pisa was anticipated only slightly earlier by the sacred field (Campus Sanctus) in St. Jean d'Acre (Akkon), that is hardly known in research. Most likely, it was here in Acre, rather than in Jerusalem itself, that the Pisans became familiar with the idea of a synecdochic-analogical material evocation of a translatio Hierusalem. The Pisans staged their sacred field (Campus Sanctus) architecturally as well as artistically, embedded it in the local context, and enhanced it symbolically. The true attraction for visitors and locals was the burial field covered with soil from Jerusalem at the center, the centrepiece of the present investigation, as it were. With the Camposanto, the Pisans built a huge reliquary for this sacred earth. Acknowledging the cultic centrality of the inner field, Rahel Meier interprets Buonamico Buffalmacco's frescoes and hypothesizes that a reference to the Purgatory can be found in the depicted rock. Anyone interested in medieval history, pilgrim accounts, holy places, cemeteries, and beliefs can look forward to a methodologically broad study with innovative results.
Rahel Meier (1985) studied art history, archeology, and history of the Middle Ages at the Universities of Zurich, Paris IV, and Basel. Her research project was funded by the Swiss National Science Foundation with a Doc.CH grant. Research stays took her to Florence, Rome, Akkon, Jerusalem and Pisa for field research, archive and library visits. As a freelance art historian, she is currently leading a project on the painterly legacy of Eduard Gubler (1891–1971), works as an art mediator and coach, and is a lecturer at the University of Zurich. Rahel Meier lives in Zurich with her husband and two daughters.