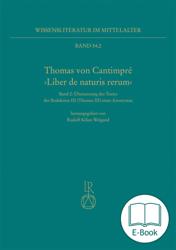 E-book 4.0 MB
Based on the encyclopaedia "Liber de natura rerum" by the Dominican Thomas of Cantimpré, the so-called 'Thomas III' version was produced by an anonymous editor in the 13th century. Out of interest in natural things themselves, he excerpted the found material, reprocessed it and rearranged it into 20 books with an idiosyncratic sequence. The abundance of surviving manuscripts of his editing documents the extraordinarily great medieval interest in this form of natural history, which was no longer predominantly spiritually oriented. This volume offers the New High German translation of the original Latin text published in vol. 54-1. With the help of the enclosed indexes, the Mhd. reception text can also be made accessible.