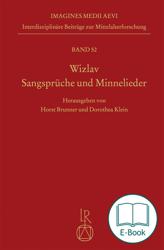 E-book 17.9 MB
Wizlav (the boy), who was probably identical with Prince Wizlav III of Rügen († 1325), was not only a creator of original texts, but also a gifted melodist. Among the authors of Middle High German songs, he occupies a special position, since all the melodies not only to his songs but also to his minnesongs have been preserved in the Jena Song Manuscript (c. 1340/50); the minnesong melodies have otherwise been almost completely lost. The new edition takes the place of older attempts at editions. It offers not only the texts and melodies, but also translations into New High German as well as a detailed commentary on the stanzaic forms, the melodies, the text types and the sometimes difficult language of the author, plus a facsimile of the source.
This series, which will comprise doctoral and professorial dissertations and other monographs as well as collective volumes, aims at highlighting and promoting interdisciplinarity in Medieval Studies even more than is currently the case. Works from all branches of Medieval Studies will be accepted, provided they emphasise the aspect of interdisciplinarity, i.e. they attempt to transgress the boundaries of any single subject.