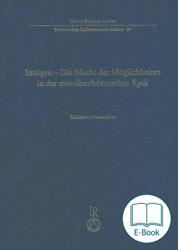 E-book 3.7 MB
This study provides a precise definition of the term ‘intrigue’, which has not been a defined term in the medieval studies so far. The analysis is based on a selection of Middle High German novels and epics from the 12th to the 14th century. In addition to their significance for the narrative structure, intrigues prove to be alterable, possible courses of actions for complex, multidimensional characters within the MGH literature. As an interface between drama, plot dynamics and development of characters, intrigues are interwoven with official and private power constellations and provide new impetus to the debate about fictionality in narrative stories of the Middle Ages.

Based on a selection of Middle High German novels and epics from the 12th to the 14th century, the author analyses the literary motif of intrigues in the courtly literature. The study provides a precise definition of the term ‘intrigue’, which has not been a defined term in the medieval studies so far. On this basis the author shows the nuances and diversities of intrigues within the texts. Intrigues are not only an important motif in MGH narratives, but also substantial components: Without intrigues there would be no ‘Rolandslied’, the story of ‘Herzog Ernst’ would be as short as 650 verses, Tristan would not fall in love with his Isolde, and the tragedy of the ‘Nibelungenlied’ would never take place, as well as the happy ending of the ‘Iwein’. Intrigues exert a profound influence on the narrative structure of MGH epic poetry. In many cases they are the primum movens of the text. As a narrative drive, they have the capacity to put characters in motion, break deadlocked, harmonic constellations of characters, start conflicts, as well as create suspense and comprehensible motivations behind characters’ actions. Thus, they prevent the termination of the narrative. Therefore, intrigues are not only substantial within the base of the storyline, but also they are necessary in an extradiegetic way for the narrator and poet of the narration. The cast of an intrigue consists of complex, multidimensional characters, trying to take charge of their own fate. When they feel and think on the inside, they are even able to show a distinct behaviour towards other characters on the outside. The intrigue turns to be the method of choice for conflict management in cases when a direct confrontation is not possible or does not appear very promising (e.g. by means of the invincibility of an ideal hero or the complex relational structures at court and in families). For that reason, intrigues provide new opportunities for action especially for female characters, which are destined to be passive with respect to their role in medieval narratives. The intrigue in its variety forms is widely spread in the literature of the high medieval epoch and takes charge of different narrative functions. As an interface between drama, plot dynamics and development of characters, intrigues are interwoven with official and private power constellations and provide new impetus to the debate about fictionality in narrative stories of the Middle Ages. The following literary works have been analysed: ‘Rolandslied’ by Pfaffe Konrad, Stricker’s ‘Karl’, ‘Nibelungenlied’, ‘Herzog Ernst B’, ‘Iwein’ by Hartmann von Aue, ‘Die Krone’ by Heinrich von dem Türlin, ‘Tristan’ by Gottfried of Straßburg, ‘Liet von Troye’ by Herbort von Fritzlar and ‘Trojanerkrieg’ by Konrad von Würzburg and ‘Friedrich von Schwaben’.