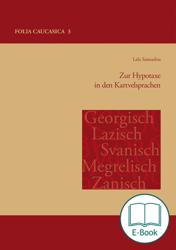 E-book 5.9 MB
This book deals with the problem of hypotactic structures in the Kartvelian, videlicet, South Caucasian languages and represents a comprehensive study of speech reporting in these languages. The most dominant member of this language family, Georgian, which takes recourse to more than 1500-year-old written literary tradition, is represented here with its three stages of development and also dialect forms. Empirical and descriptive approaches have priority. They are treated by mutual comparison within the Kartvelian languages. The research problem is illustrated and analyzed by numerous sentence examples from the respective languages. Various graphic representations, especially tables, provide an overview relating to the research object.