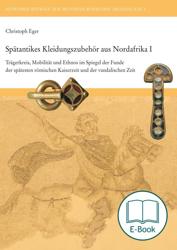 E-book 19.8 MB
This study is the first to give a comprehensive account of extant dress accessories, especially brooches and belt buckles, from late ancient North Africa. In the first of two volumes, the findings dating from the latest period of Roman rule and the Vandalic period following it are presented, most of which were not published before. In addition to aspects of the chronology and geographical distribution of these findings, which are of high importance for protohistoric and Provincial Roman archaeology, the study will focus on questions about the wearers and their cultural identity.

As an important part of dress accessories, metal fittings and personal ornaments can mirror social identities: in Late Antiquity, brooches and belt buckles particularly served as eye-catchers that offered considerable information on the social rank and representation of the wearer. Moreover, these items could express the wearer’s personal cultural identity and Christian beliefs.
The belt was a sign of legal capacity as well as an item of adornment. As cingulum militiae, it served as an integral component of civilian and military livery together with a cloak and specific type of brooch (paludamentum, chlamys) from the Tetrarchic period onwards.
To date, finds of Late Antique personal ornaments are not well known from North Africa due to the generally unsatisfactory state of publication of small finds from the Southern Mediterranean area.
For the first time, the relevant material is compiled and assessed here as part of a habilitation thesis recently conducted at the University of Munich.
The analysis focussed on the collection of the national archaeological museum of Carthage, and additional material has been studied from several museums in eastern Algeria and western Libya (i.e. Djemila, Timgad and Sabratha etc.). The first of the intended two volumes presents artefacts dating to the very latest Roman imperial and Vandalic period (c. AD 400 to mid 6th century). However, only a few of the approx. 190 objects originate from closed burials or stratified occupation layers. The majority of the objects are antiquarian finds that lack any archaeological context; they are nonetheless of immense importance due to their increased availability and typological diversity. In addition to a thorough typological and chronological analysis that focuses on the regional and supra-regional context of the objects, a further assessment of the finds target questions regarding potential consumers and their cultural and ethnic origin. For instance, the analysis examines whether the profound changes that influenced North Africa at the end of Western Roman rule and the formation of the Vandalic-Alanic regnum are mirrored in the material evidence of dress accessories. Further focus will attempt a clarification of an ongoing controversy regarding the interpretation of several burial finds, which have been effectively assigned to the Vandalic fashion by one line of research, but also to the attire of the late Roman military aristocracy by another. The potential of personal dress adornments of the Vandalic period for the interpretation of settlement histories concludes the analysis.
From 1987-1997, Christoph Eger studied Prehistory, Classical Archaeology and Ancient History at the Universities of Bonn, Mainz and Munich. His doctoral thesis focused on the later pre-Roman Iron Age and the Roman imperial period in Northern Germany. After undertaking a museum internship and being granted the travelling stipend of the German Archaeological Institute, he worked as a research fellow at the Madrid branch of the German Archaeological Institute from 2001 to 2006. In 2009, he submitted his habilitation thesis on Late Antique dress accessories from North Africa to the University of Munich, where he has been a lecturer since 2010. He is currently researching Late Antique burial customs in the Near East at the Oriental Department of the German Archaeological Institute.