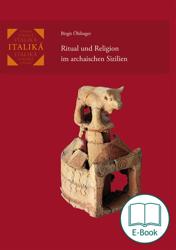 E-book 104.6 MB
This work centres on the detailed examination of inland ritual sites dating from the Archaic period in Sicily (late 8th to early 5th centuries BC), which is based on an emic perspective of the indigenous people. It aims to offer a nuanced analysis of local ritual sites by tracing the diverse formation and transformation processes on the basis of a selection of case studies. The indigenous cult sites are examined within the appropriate settlement contexts from the point of view of sociology of religion and social archaeology in order to gain new insight into how such sites functioned and what social structures and local identities were associated with each site.

In her in-depth study of the rich archaelogical record of ritual contexts of inland settlements of Archaic Sicily, submitted as PhD thesis to the Universitz of insbruck, the author of this prize-winning book takes an explicit methodological approach towards her subject in the vein of Anthony F. C. Wallace’s definition of ritual as ‘religion in action’ as expounded in his “Religion. An Anthropological View” (New York 1966) {...}
This book is a must for all those who engage in the archaeological study of ‘Religion in Action’.

In Germania 96, 2018, S. 307-311
---------------------
„Ritual und Religion in archaischen Sizilien1 publishes Birgit Öhlinger’s Innsbruck dissertation
(appropriately, it has cultural contact in its subtitle), examining inland indigenous
ritual sites from a sociological and archaeological perspective: deeper understanding of religion
and ritual is directly linked to a better understanding of predominant social structure,
and, in a socio-religious approach, religion, economy, politics and family are among the
many sub-systems that partake of reciprocal relationships. (...) Handsomely produced in large format with many
high-quality illustrations.“

Von G.R. Tsetskhladze
In Ancient West & East Vol. 18 (2019), S. 302
Birgit Öhlinger, born in 1983, studied Classical Archaeology, Ancient History and Egyptology in Innsbruck and Vienna. 2014 she received her doctorate in Classical Archaeology at the Institute of Archaeologies at the University of Innsbruck, where she is currently working as assistant professor. Since 2011 she, together with Prof. Erich Kistler, is directing excavations at Monte Iato, an indigenous hill-top settlement in western Sicily. Her research focuses on the pre-Roman Mediterranean and explores cultural contacts and transmediterranean flows. Another focus is on religion and ritual and their material expressions in the archaeological record with emphasis on Sicily.