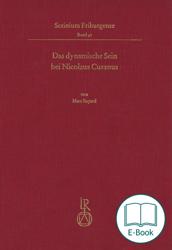 E-book 8.3 MB
The book studies those sacred songs of the Monk of Salzburg corpus which do not rely directly on a Latin–melodic or textual–original. These songs show the form of the canzonic stanza and have therefore been considered to belong into the vernacular tradition of Sangspruchdichtung and Meistergesang. In contrast, the study argues that they rely on, imitate and modify the model of the (monophonic) Latin Liturgical Song, a genre which emerged in the late 12th century and was highly productive in Central Europe until the mid-15th century. For this purpose, a substantial number of late medieval Latin manuscripts containing songs have been assorted, a selection of the Latin songs is edited in an appendix.

The subject of this study are the sacred songs in the ‘Monk of Salzburg’ corpus which have the stanzaic form of the canzone. The monograph focuses on the question to which musical and lyrical traditions these songs refer. In line with the critical literature review of the functions of vernacular sacred song in the German speaking regions, the study argues that these songs are to be interpreted within the Latin tradition of the (monophonic) Liturgical Song, a genre which emerged in the late 12th century and was highly productive in Central Europe until the mid-15th century.
The study of a larger amount of manuscripts from the 14th and 15th century containing monophonic Latin songs provides the ground for a comparison of late medieval Latin liturgical songs which also have a canzonic form with the German songs from the Monk corpus. In order to establish the connection between Latin and German songs, the study proposes a new analytical model sung poetry which integrates linguistic, melodic and metrical features and those of the rhyme in regard to the stanza as a unity. In conclusion, it can be shown that the Sacred songs of the Monk corpus as whole almost systematically rely on, reflect and adapt all the elaborate and artistic forms of liturgical poetry.
The monograph makes the field of monophonic Latin Liturgical Song accessible to scholars of Medieval German Literature and provides a profound overview; German-Latin contrafacta are studied in detail. Additionally, the book is of relevance for musicologists–due to the analyses of melodies–as well as for scholars of Medieval Latin. Furthermore, it contributes to the research of Latin manuscripts containing musical notation from the 14th and 15th century. One of the appendices contains the edition of 38 late medieval Liturgical Songs.

Stefan Rosmer studied German Philology, Musicology and Media and Communication at Leipzig University from 2000 to 2006. In 2006/07 he taught German Linguistics a the Germanic Departement of the Eötvös Loránd University in Budapest with a scholarship of the German Academic Exchange Service. 2009-2018 he worked at the German Seminar at the University of Basel, where he obtained his PhD in 2014. Since 2018 he holds a grant from the Swiss National Fund for a research project on Early Medieval Literature and Historical Narratology working at the Georg August University in Göttingen and the University of Santiago de Compostela. His main fields of interest are medieval lyric, especially sacred poetry; late medieval monophony; Sangspruchdichtung; early medieval versifications of the Bible; narratology; praxeological theorie