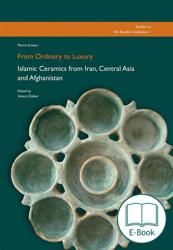 From Ordinary to Luxury

E-book 169.1 MB
“From Ordinary to Luxury” is based on the glazed and unglazed pottery from The Bumiller Collection and is a profound study of Iranian and Central Asian ceramics. The Bumiller set is not a collection of masterpieces, but gives an insight into the most diverse wares of daily life. Pierre Siméon’s expertise and hands-on experience as an archaeologist are invaluable assets for the knowledge of provenance and distribution of Iranian and Central Asian pottery. Apart from that, his study takes into account the works of our Russian colleagues, that have gone without adequate acknowledgement for decades due to the language barrier.

188 pieces of glazed and unglazed pottery from The University Museum of Islamic Art are studied and grouped into categories of surface treatment. The collection’s asset is its wide range of medieval material, geographically spreading from Iran through the today Central Asian republics as far as Afghanistan.
Apart from that it is made up of what we would call the more common performance of pottery. Siméon’s archaeological approach to the material develops the material as a prime source of information on provenance, distribution and trade. Archaeological data furthermore provide answers to questions of the art historian on the development and diffusion of motifs, spread of techniques and the relationship to other materials. Through the mutual approach the author is able to explore social, economic and artistic aspects of historical societies.
The chapters are preceded by a short introduction by the category treated and, if the material allows, completed by a thorough discussion and analysis of the group. As such, the spheroconical vessels for example are comprehensively treated including a discussion of the archaeological and textual sources that for the first time allow a convincing interpretation of this particular group.
As far as possible attributions, comparisons and references also to unknown collections and finds even from remote sites top off the entry of each object and make it available for further study. To make the study complete, each object is described and thoroughly documented with a profile drawing and several colour photographs. Furthermore, the integration of the relevant bibliography including the Russian works that are inaccessible for most of the readers, but essential for the understanding of the material, gives new insights into the scholarly approach to Islamic ceramics from Central Asia.
The Collection was assembled by the late Manfred Bumiller (1928-2018) from 1981 on, originally planned as a collection of Iranian medieval metalwork, but soon completed by a considerable number of ceramics of different qualities. After a break of more than ten years Siméon’s thorough and profound examination of material now studied in a comprehensive way launches the new series Studies on The Bumiller Collection that is dedicated to the exploration of the Museum’s material. May it serve as a useful tool for whoever is interested in Eastern Islamic ceramics.

Pierre Siméon is a French archaeologist, specialised on the Islamic world with a focus on Central Asia. He completed his MA at the Islamic Art History department at the Paris IV Sorbonne University and holds a PhD from the Islamic Archaeology department at the Paris I Pantheon-Sorbonne University.
Since 2000 he has been working with several international teams in archaeological excavations in Bahrain, Mongolia, Pakistan, Yemen, Turkmenistan, Tajikistan and Uzbekistan. Siméon is an internationally active expert with a main focus on the material culture in order to understand the economic and social history of mediaeval Islamic society.


Verena Daiber completed her MA in Near Eastern archaeology and Arabic literature at the Free University of Berlin. She participated in excavations in Syria and Lebanon, studying medieval pottery, architecture and text sources. From 2001 to 2006 she was research assistant at the German Archaeological Institute in Damascus. In 2009 she gained her PhD at the University of Bamberg with a thesis on the 18th century public architecture of Damascus. She has been teaching at the Free University of Berlin and the University of Bamberg. Since 2017 she is the curator of the Bumiller Collection / University Museum of Islamic Art in Bamberg. Her focus is on exploring the textual and material culture of medieval Central Arabic lands and Iran.