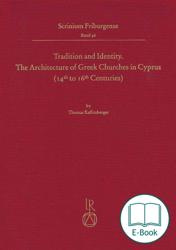 Tradition and Identity: The Architecture of Greek Churches in Cyprus (14th to 16th Centuries)