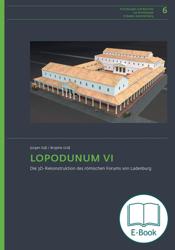 E-book 7.8 MB
In their publication "The 3D Reconstruction of the Roman Forum at Ladenburg", the authors Juergen Suess and Brigitte Graef describe and explain the reason for their virtual reconstruction of the forum of the former "Lopodunum", at the location of the present town of Ladenburg between Mannheim and Heidelberg. The result of this reconstruction can be seen in an animation at the Lobdengau Museum at Ladenburg. The work is published as volume VI of the series "LOPODUNUM" by the "Landesamt fuer Denkmalpflege at Baden-Wuerttemberg“.

Ladenburg, during Roman times, was the administrative centre of a so-called "civitas".  This status included a large architectural complex in the middle of town consisting of the forum and the basilica.  Although only remnants were found during the excavation, even those reflect the former greatness and splendor of the original structure.

Further study of the ancient building complex - dating back to the 2nd century A.D. - led to additional research into Roman architecture of the province of Germania Superior during the high empire.  The aim of this treatise is not only to inspect the remains of the forum, but to consider what the destroyed elements may have looked like, such as: floors, columns, windows, doors, steps, ceilings, and roofs.

Besides discussions concerning the design of the forum, opinions are also debated with respect to functions of parts, e.g. the basilica and entrance hall. The design of a building cannot be separated from its function. And this in turn raises the question, where the imagined curia or city council might have been located?  One would assume that it mirrored the administrative status of the centre of a civitas.  Could it be that the administration met at the large apsis on the backside of the basilica? Furthermore, one is led to another question: What monuments might have stood within the courtyard of the forum?

The book on the 3D reconstruction of the Ladenburg Forum therefore touches upon important themes, which concern Roman fora in the provinces in general.