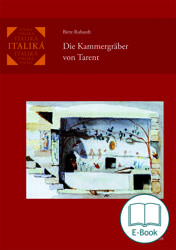 E-book 33.2 MB
The Hellenistic chamber tombs of Taranto represent by far the largest group of known Hellenistic burial chambers in the ancient Mediterranean. In the sixth volume of the Italiká series, the chamber tombs constructed between the 4th and 1st century BC in the necropolis of Taranto are compiled and documented in detail for the first time. The systematic analysis of this form of burial reveals how the complex processes in the South Italian and Mediterranean regions have influenced grave architecture, their interior décor, and the burial cult of the Tarantine society during this period.

Taranto is still one of the most important cities in Southern Italy. Already at the end of the 8th century BC the city was founded as the only Spartan colony and soon became the leading trading center of Magna Graecia (Greater Greece). Between the last third of the 4th and the 1st century BC, a social class benefited from the political and economic situation, expressing its prosperity in the construction of architecturally elaborate chamber tombs, rich with grave goods.

The present book compiles the Tarantine chamber tombs for the first time in a comprehensive catalog, which includes plans of the burial chambers and the necropolis, a description of each burial context, and photographic documentation of the finds. With more than 150 chamber tombs discovered so far, the archaeological record presented here forms the largest group of South Italian chamber tombs ever systematically evaluated. Taranto boasts the largest concentration of chamber tombs discovered in any necropolis in Southern Italy to date, which can be taken as an indication of Taranto’s enormous wealth during this time period. At the same time, the grave buildings are an example of the incipient monumentalization of grave architecture in many parts of Southern Italy since the last third of the 4th century BC.

An in-depth analysis of the chamber tombs’ architecture, its décor and grave goods, as well as the topographical organization of the necropolis forms the foundation of this study. Through a comparison of the tombs with other contemporary South Italian burial chambers, a typical appearance of the Tarantine chamber tombs emerges. These tombs show how the Tarantine upper class responded to cultural influences, armed conflicts, and conquests, and how they changed or preserved the ideological and identity-creating elements of self-expression in the grave. The intervention of Rome in Southern Italy and the eastern Mediterranean also contributed to significant structural changes in the tombs. New elements and peculiarities in the grave architecture can be interpreted as reflections of contemporary events and social change. It should be emphasized, however, that the structure of a necropolis is not a simple reflection of real social conditions, but rather a representation of the ideal image that a society designs for itself.

Birte Ruhardt (1985) studied classical archeology, archeology of the Roman provinces, and art history in Cologne and Rome. As a Cotutela di Tesi process, she earned her doctorate in 2015 at the University of Cologne and at the Università di Roma "La Sapienza" with a work on the chamber tombs of Taranto. She was awarded the Premio Attilio Stazio of the Fondazione Taranto e la Magna Grecia in 2012. As a scholarship holder of the a.r.t.e.s. Graduate School for the Humanities Cologne and the German Academic Exchange Service she spent long periods of research at the Museo Nazionale Archeologico di Taranto and Queen's University in Kingston (Canada). Since 2015, she has been working for the Gerda Henkel Foundation. In 2017, she became the foundation’s Executive Board Affairs Manager. Her research interests continue to be in the field of Italic archeology and funeral archeology, in particular sepulchral culture in Southern Italy.