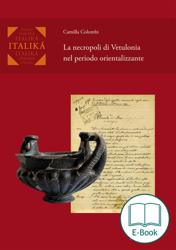 E-book 100.6 MB
Excavations in the late 19th and early 20th century in the cemetery of the Etruscan city of Vetulonia unearthed many opulent ‘princely graves’ dating to the Orientalizing period (end of the 8th – beginning of the 6th century BC). However, the cemetery has never been the subject of a comprehensive investigation. This volume offers for the first time an overall picture of the research history, the funeral customs and the material culture of Orientalizing Vetulonia. The study is aimed at recontextualizing the grave complexes and is based on the unpublished original documentation and on the corpus of finds. New insights on the social development of Vetulonia are offered, in particular on the emergence the ‘gentilician’ society and the phenomenon of the ‘princely graves’.

The work, written in Italian, deals with the cemetery of the Etruscan settlement of Vetulonia and its evolution during the Orientalising period (late 8th - early 6th century BC). Principal focus of the research are the question of the formation of the so-called princely tombs and the gentilician society in Vetulonia and their detection in the structure and development of the cemetery - both phenomena that have been observed in other Etruscan necropolis of the Orientalizing period.
The necropolis of Vetulonia was excavated mainly by the physician Isidoro Falchi in the late 19th and early 20th centuries and only occasionally studied in later times. The results of this research were only partially published: For this reason, an overarching study of the material and the necropolis of Vetulonia as a whole has long been a desideratum of archaeological research. The book "La necropoli di Vetulonia nel periodo orientalizzante" examines for the time all excavation campaigns in Vetulonia and offers a comprehensive overview of the Orientalising period in Vetulonia, its development and characteristics in this important Etruscan centre. The over 1000 images and the extensive catalogues on CD offer for the first time a comprehensive material basis for the future scientific research on Vetulonia.
The study consists of three parts, in which the central aspects of the cemetery are examined: the history of research, the grave-finds and the cultural-historical significance. The starting point for the first part was the original excavation documentation (1882-1913) and the excavation reports published by the excavator. The analysis and comparison with the preserved grave-finds made it possible to reconstruct the individual grave inventories and to examine their composition as well as to reconstruct a new plan of the cemetery. The second part of the study deals in detail with the graves of the Orientalising period and considers the grave typology, the funerary rituals and the grave goods. In particular, the approximately 4,000 finds that have survived are subjected to a detailed study and typologically structured. The cultural-historical aspects are treated in the third part of the study. The typologically classified material is divided into chronological phases using the statistical methods of seriation and correspondence analysis. The graves are then subjected to a series of reflections based on the composition of their inventories, architecture, dating and location in the necropolis. In particular, observations are made on the distinction between men's and women's graves, on the distribution of weapons and the distribution of certain rank insignia (such as wagons and bridles, elements of the banquet and wine consumption, keimelia). The combinations of such rank insignia lead to an attempt to characterize "princely graves". The chronological and topographic distribution of the "princely graves" and of the other burials is then analysed: Throughout the Orientalising period, both the old Villanovan burial grounds and new burial grounds are used. However, the " princely graves" are mostly set in new places and are surrounded by small groups of graves over time. They seem to express a desire to differentiate themselves from the rest of society by seeking new burial sites for their own clan. This development is eventually linked to the formation of a gentilician society.
Camilla Colombi (1980) studied Classical Archeology, Ancient Near Eastern Archeology and Ancient History at the University of Basel – with a year abroad in Florence. With a dissertation on the Etruscan cemetery of Vetulonia in the Orientalizing period, she received her doctorate in March 2014 at the University of Basel. She has been scientific assistant at the University of Basel and since 2016 she is researcher at the Rome Department of the German Archaeological Institute. Her research interests include Etruscology and pre-roman Italian Archeology, the Precolonial period in Southern Italy, funerary Archeology and Cultural Contacts.