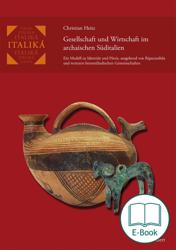 DVD_Zusatzmaterial_Fundtafeln_Italika_Heitz.pdf 570.3 MB
The necropolis of Ripacandida in southern Italy (Apulia/prov. Foggia) is situated on a hill mediating between the uplands of the southern Apennines to the west and the Adriatic shore to the east. The local Archaic-Classical community (6th/5th century BCE) witnessed the rise of eastern Mediterranean settlements (apoikiai) in southern Italy and thereby the creation of a completely new situation of cultural transfer and encounter in the region. This is reflected in the material goods incorporated in the tombs that will entirely be presented and discussed in the volume. While largely maintaining their traditional ties to the neighboring areas, reflected in the use of material culture from the adjacent areas, the influx of Greek elements rises remarkably during the use period of the graveyard. It however becomes apparent that the Greek-style pottery incorporated into the local society does not replace traditional shapes and wares but rather complemented by these imports or imitations. In the course of the two centuries under investigation, the affiliation of the local community seems to shift from a more inland-orientated perspective to a closer connection to the lowlands Adriatic shore. The local community in the 6th century BCE was basically organized in an egalitarian way in small household units as suggested by the tombs arranged in clusters. In the 5th century BCE, richly equipped burials of males were separated from the tomb clusters, indicating social changes. At the same time, richly equipped females become prominent in some clusters and take over some male burial features (body placement), possibly indicating the takeover of male characteristics, like the household head, in the living community as well.
The minute analysis of the local community and the comparison with other sites of the region shows that the indigenous society in the period under study is not at all static but very dynamic, and not a mere static receiver of new impulses coming from the ‘culturally superior’ (and much better researched) newcomers from the east. A number of internal social developments (i.e. hierarchization, reorganization of familial structures and gender roles, economic reorientation) occurred within the indigenous communities of southeastern Italy that cannot be attributed to external stimuli triggered by foreign presence alone.
Christian Heitz studied Classical Archaeology, Prehistory and Early History and Ancient History in Heidelberg. He achieved the MPhil in Archaeology and Anthropology 1998 at the University of Cambridge, the PhD in Classical Archaeology 2003 in Heidelberg, and the habilitation 2015 in Innsbruck. His research interests cover a wide spectrum, from Aegean Bronze Age to Roman art. He is currently working on the Pre-Roman and Roman Iron Age in southern Italy. Current publications deal with cross-cultural comparisons of cultural contact, the role of textiles and pastoralism as well as social developments in Archaic-Classical southern Italy. He is director of the investigations at Ascoli Satriano (Prov. Foggia/Apulia) at the Institute of Archaeologies of the University of Innsbruck.