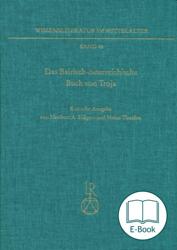 E-book 7.2 MB
With this volume, Heribert A. Hilgers and Heinz Thoelen present a critical edition of one of the most noteworthy and outstanding late medieval German prose epics about Troy, which has been prepared on the basis of all surviving manuscripts. The text concerned is the one that was referred to as the “Buch von Troja II” in previous studies, which was probably written around 1450 by an anonymous author using especially Konrad of Würzburg’s “Trojanerkrieg”, Guido de Columnis’ “Historia destructionis Troiae” and the “Excidium Troiae”. So far, this text was available only in two inadequate prints of manuscripts, of which one is based on the knowledge of no more than two textual witnesses and the other is hard to access. In contrast to their precursors, the present editors have taken particular care to ascertain and take into consideration the influence of the sources on the text. The change of the title into “Bairisch-österreichisches Buch von Troja” is modelled on the example of the “Buch von Troja I”, whose rather insignificant title was replaced by the more informative term “Elsässisches Trojabuch” in Christoph Witzel’s edition. “Bairisch”, in this case, refers to the language, “österreichisch” to the likely place of origin. The work was very probably composed in Vienna, Wiener Neustadt or Klosterneuburg.