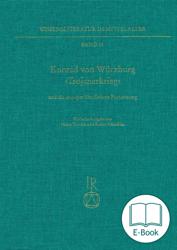 E-book 6.1 MB
Konrad’s von Würzburg ‘Trojanerkrieg’ - only fragmentary preserved because of its author’s death in 1287 and finally completed by an anonymous writer at the beginning of the 14th century- was one of the most-read books of that time and it formed the basis of the material put in prose fiction. The here presented critical edition by Heinz Thoelen and Bianca Häberlein is founded and researched on the complete number of manuscripts known up to the present. As the Straßburg manuscript A got lost Thoelen / Häberlein took the copy af Georg Karl Frommann from 1836 in its place. The editors also made an evaluation of the complete fragmentary editions of the 18thand 19thcenturies hereby including Adelbert von Keller’s edition from 1858 and Karl Bartsch’s collection of variations and proposals for corrections from 1877.

Konrad’s von Würzburg ‘Trojanerkrieg’ - only fragmentarily preserved because of its author’s death in 1287 and finally completed in the early 14th century by an anonymous writer - was one of the most-widely read books of that time and today it is seen as the most important German novel from the second half of the 13th century. In the Middle Ages a lot of quotations were taken from the novel - some passages were embedded in widely-read ‘Weltchronik’-books of the 14th and 15th centuries. Furthermore the novel formed the basis for two successful novels in prose of the late Middle Ages with the titles ‘Das Elsässische Trojabuch’ and ‘Das Bairisch-österreichische Buch von Troja’, which subsequently formed the basis for printed books about Troy in the late 15th century. Konrad’s von Würzburg main source was Benoît de Sainte-Maure’s ‘Roman de Troie’ (about 1165) in Old French, other sources were sources from the classical antiquity (Dares Phrygius, Dictys Cretensis, Ovid, Statius and Vergil) - thus the ‘Trojanerkrieg’ also is an excellent evidence of how the classical antiquity was seen in the Middle Ages. The now presented critical edition by Heinz Thoelen and Bianca Häberlein is founded and researched on all preserved manuscripts known up to this day. It replaces both Adelbert von Keller’s old edition from 1858 and Karl Bartsch’s collection of variations and proposals for corrections from 1877. Differently to the old edition Thoelen/Häberlein have placed all manuscript variations immediately below the text. Furthermore headings give structure to the novel extensive in its length and make it clearly arranged. The edition includes an introduction, which indicates the results of traditional researches as well as a register of literature, and it includes a detailed register with explanations to persons and places, so that the relationship between the characters and the scenes of action get more distinct for the reader. The edition forms a new basis for further scientific work with Konrad’s text.