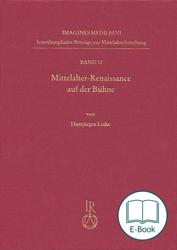 E-book 9.3 MB
The study is devoted to tracing the reanimation of medieval drama and theatre in Germany in modern times. Based on a collection of more than 3000 documented performances the historical and theatrical developments are analysed critically

After some attmpts had been already made during the 19th century the mediva drama and theatre – both Latin and vernacular, liturgical and secular – were reanimated in Genamy at the beginning of the 20th century as part of a various efforts of social, cultual and religius reform. Since then more than 30 plays have been acted and are stil actedtoday, at the beginning partly in modern adaptions, but more and more as rconstructions of the original manner of medieval staging. At first preformed by speaking actors only, the plays increasingly bacame the damain of musicl ensembles specialized in medieval music, as the liturgical plays were orginally performed not only hhistrionically, but also sung and accompanied by musical instruments. In this book more than 3000 modern performances are documented and the historical and theatrical process is traced and critically analysed.

Born in 1928, Hans Jürgen Linke studied German Philology, History of Theatre and Art at Cologne University. In 1955 the degree of Dr. phil. (Ph. D.) was conferred upon him for a dissertation on Stefan George. After his dissertation Linke took up further studies in English and French at the University of Göttingen and the Hamburg, which he completed in 1958. In 1966 he qualified for postdoctoral university teaching in German Philology at the University of Giessen with the postdoctoral thesis on Harmann von Aue. He was appointed full professor of German Philology at Cologne University in 1969. He retired in 1994.
This series, which will comprise doctoral and professorial dissertations and other monographs as well as collective volumes, aims at highlighting and promoting interdisciplinarity in Medieval Studies even more than is currently the case. Works from all branches of Medieval Studies will be accepted, provided they emphasise the aspect of interdisciplinarity, i.e. they attempt to transgress the boundaries of any single subject.