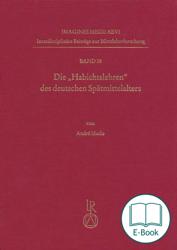 E-book 20.8 MB
Not before their successor, the “Beizbüchlein”, was published as the very first printed book on hunting in Europe, the so-called “Habichtslehren” (“goshawk-lore”) got to some publicity and made quite remarkable impact on the development of a widespread and highly relevant cultural technique of medieval society. The work at hand closes many gapes in research by editing the three known German manuscripts newly resp. for the first time, but also translating and extensively annotation them. Moreover the question asked since the 1960s on the origin of these texts in the German dialect´s landscape can be answered coherently. A comprehensive description of the guild-bound “falconer’s language” forms the third part of this volume.

This volume closes many gapes in research regarding the “Habichtslehren” – the over many centuries virtually unnoticed first original treatises on falconry in German language. First, as not only the two manuscripts published by Kurt Lindner are revised and newly edited, but especially because of the first edition and extensive annotation of the “Jüngere Habichtslehre”, an interstage not yet known in the 1960s, but crucial for understanding the genesis of these writings. From the very beginning a work was intended, that would not only develop some relevance for indo-european, medieval or codicological studies, but also be of fruitful use for contemporary falconers, enthusiasts for hawking itself or historically working ornithologists. Thus all three German manuscripts we know of, including the discussion of the Latin manuscript L, are available in one volume concluding the latest state of knowledge. Here already a great progress in editing the primary sources of that time stands out.
In the second part for the first time the question asked since the 1960s on the origin of these texts in the German dialect´s landscape can be answered coherently. Alongside a complex and meticulous analysis of the manuscripts explaining their geographical provenience by examinating their linguistic characteristics non-linguistic facts are also considered as an argument, in particular the ancient distribution of the mentioned game species. In this way a second, completely independent chain of evidence can be established, which’s combination with philological methods allows only one conclusion.
The very fruitful cultural connections so typical for falconry itself express themselves in particular in the vitality of the “falconer’s language”, an early guild idiom, that has included many stimuli and influences from a variety of languages and cultures. To fathom these relations is the pretension of the third chapter. Every technical expression encountered in the “Habichtslehren” undergoes an elaborate examination in terms of his first appearance in German, his contemporary use, meaning and etymology. In the course of this not only know interpretations were reported, but many new suggestions put forth. In this part also there was no exclusive focus on linguistic methods but on a synthesis with the documented facts of biology and ornithology. Without that many coexistent opportunities causing problems of interpretation would have to be left undecided resp. unsolved.