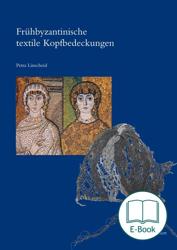 E-book 36.9 MB
The analysis of archaeological textiles in order to write their ancient cultural history is still in its infancy. This study contributes to this process by cataloging more than 600 original pieces of headwear from the late Roman and early Byzantine periods, and evaluates them in terms of their location, date, sociological context, visual and written sources, as well as their precursors and successors. The majority of the analyzed pieces have so far remained unpublished, and many are for the first time being identified and reconstructed as head coverings. The book thus provides a material basis for costume historians, textile experts, archaeologists, sociologists, art historians, philologists, and museum curators.
Original textiles from the Early Byzantine era are preserved in the hot and dry climate of today´s Egypt, Israel and Syria. Determining the original use of these objects, which usually survive in a fragmentary state, has long time been neglected in academic research. But by considering their original use and archaeological context, these textile finds constitute valuable sources for reconstructing Early Byzantine material culture.
In this sense, the present book is dedicated to the recording, documentation and evaluation of originally preserved textile headcoverings. During long years of investigation into the appearance, techniques and making up of Early Byzantine textiles, the author recorded more than 600 original textile headcoverings, most of them unpublished so far. The material comprises hairnets, scarfs, bonnets, hoods, caps and hats. Judging from their spread and chronology, these headcoverings were in use all over the Early Byzantine Empire.
The archaeological contexts of the finds give evidence, that some types of headcoverings were worn exclusively by women. The finds reveal, that beginning with the 4th century - presumably with the rise of Christianity - women kept their head covered. The hairnet probably was a "must" for the Early Byzantine woman. Different shapes of hairnets can be traced back to various, sociologically rooted ways of wearing and hairstyles.
The book is divided into two sections. The first section includes 190 pages of text with 93 illustrations presenting the various types of headcoverings and their appearance, spread, dating implications, archaeological context, way of wearing, textile technology, pictorial and literal sources, precursor and successor. In the catalogue section each of the 610 headcoverings has it´s own entry, 336 items are illustrated in black and white, 20 items in colour. The volume is completed by various registers, a glossary and a map.
The present book is a basic work not only for textile archaeologists and costume historians, but as well for archaeologists, art historians, museum curators and historians researching on Byzantine or Late Antique culture.

Petra Linscheid
Magister in Christliche Archäologie at the University of Bonn, then researcher on the textile collection at the Museum für Byzantinische Kunst, Berlin. Doctoral thesis on Early Byzantine textile headcoverings at Freie Universität Berlin, Dep. of Byzantinistik.
Currently working at Universität Bonn, Dep. of Christliche Archäologie, in the Project "Textile Bodenfunde" about local textile finds from Roman to Early Medieval times.
Specialised in archaeological textiles of the Roman, Late Antique, Early Byzantine and Merowingian Era.