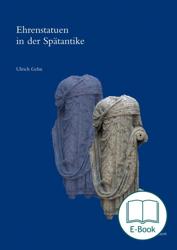 E-book 21.6 MB
The book investigates the iconography and chronology of the late antique toga statue and the late antique Chlamys statue. Both types of honorific statuary can only be observed from the Theodosian period (late-4th century) onwards. The phenomenon will be explained from the sociological, political and administrative changes that re-structured the elites of the Roman Empire after the reforms of the tetrarchy (late-3rd century); the process was completed in the late-4th century to a degree that made the development of new representational patterns possible and necessary.