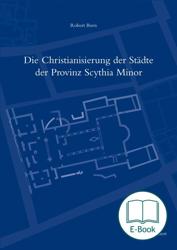 E-book 29.1 MB
Until the 7th century, the province Scythia Minor, situated between the mouth of the Danube and the Western shore of the Black Sea, was an important military and ecclesiopolitical outpost of Constaninople. At the same time, this region was a significant zone of ethnical convergence for centuries. This is exemplified by three cities, whose historical coexistence of different cultural and urbanistic traditions is the main focus of this study.
Taking the former Greek colonies Histria and Tomis (Constanta) and the city Tropaeum Traiani (Adamclisi), founded in imperial times, as an example, a reconstruction of the changes in urbanistic structures is analysed in the context of the rise of Christianity, which became a major authority in the state and society of late antiquity. The central focus of this study is on the reconstruction of the changes in the urbanistic structures of the cities, based on the analysis of vertical and horizontal references of the new churches and sepulchral grounds, but also of such parts of the cities as the city walls and the residential and handicraft areas, which were so far neglected.