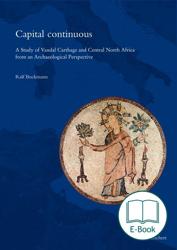 E-book 68.1 MB
The Vandal period in North Africa has aroused the interest of historians since long as an intermediate period in late antique North Africa, spanning over much of the fifth and the early sixth centuries until the Vandal kingdom was conquered by the Byzantine Empire. Most studies have concentrated on the historic sources, through which a nuanced picture of the Vandal era was gained in recent years. This book assumes an archaeological perspective as an important counterweight and addition to the historic image. Concentrating on Carthage and two larger regions in modern Tunisia, the archaeological evidence is studied with a specific interest on the behaviour of local leading classes. Within the many signs of material continuity, the way the Vandal kings understood and executed their rule over Africa has produced some evidence that also points at the decisive changes that came with the time.

The study “Capital continuous” deals with the Vandalic epoch of the fifth and early sixth centuries in North Africa that has received major historic interest in recent years. The Vandal epoch was an important transitional period between late Roman and Byzantine times, in which essential social developments took place in the religious, political and economic spheres. For a long time, the Vandal period has been viewed under the influence of tendentious historic sources. Recently, modern studies were able to reconstruct a more nuanced picture. However, the archaeological part of Vandalic North Africa has mostly been disregarded. A number of modern excavations and a change in the assessment of the sources now enable a study of the material remains of the epoch beyond single finds and coins, putting the focus on the edificial and urbanistic developments. The first part of the study engages with Carthage that became the capital of the Vandal kingdom. How were the kings present, what ideological role did Carthage play for them and how did they intervene in the city’s development? How did the mixed elite of Vandal era Carthage act, and which changes occurred independent of the political situation? In the second part of the book, the development in what is today Tunisia and Algeria is studied, in the north east of the antique province of Africa Proconsularis and the border region of Proconsularis with Numidia and Byzacena. The relations between local officials and the Vandal government and its influence for example on public infrastructure is analysed. While major fields show great continuity from the late Roman epoch, a number of developments are visible that fully unfolded in the Byzantine epoch but had their basis earlier. “Capital continuous” is the first integral consideration of the archaeological findings of the Vandal era in North Africa in a wider sense and thereby an important addition and counterweight to the predominantly historic studies of the epoch.

„Overall, Capital continuous represents an exeellent summary of the extant material evidenee for Vandal Afriea. 1t marshals this evidenee in eombination with prudent use of some of the more important literary texts for the period to produee series of thought-provoking conclusions on the nature of Vandal governance and elite life. Ralf Bockmann has made a valuable contribution to the flourishing debate on Afriea und er the Vandals.“

--------------------------------------
„As a conclusion, Bockmann's work is a worthy one concerning several topics as the importance of Carthage from every possible point of view, the hybridation between Romano-African and Vandal elites, the survey of archaeological remains dated during Vandal time and several other themes. On the other hand, there are certain approaches that are polemic or are subject to scholarly debate. However, discuss is historiography. Finally, there are some rude historical mistakes that the author should revise if he has the chance of producing a second edition of this book. Mistakes as saying that Valentinian III was the younger brother of Honorius (9) or that Guntheric was Gaiseric's father when both were sons of the Vandal king Godegisel (118). On the other hand, it's a pity than the author didn't employ more images in such a monograph where archaeology is such a fundamental tool and there are so many sites reviewed.“

In: Sehpunkte. Rezensionsorgan für Geschichtswissenschaften Ausgabe 13 (2013) Nr. 11, (http://www.sehepunkte.de/2013/11/23654.html, 26.11.2013, 16:40.)
----------------------------------------
Capital continuous represents an excellent summary of the extant material evidence for Vandal Africa. It marshals this evidence in combination with prudent use of some of the more important literary texts for the period to produce a series of thought-provoking conclusions on the nature of Vandal governance and elite life. Ralf Bockmann has made valuable contribution to the flourishing debate on Africa under the Vandals.

born 1974, studied Prehistory, Cultural Anthropology and Classics in Hamburg, Lisbon, Berlin, Cambridge and Munich and received his PhD in Classics from the University of Munich. Currently research fellow at the Rome Department of the German Archaeological Institute. His main area of research is Late Antiquity in the Western Mediterranean, archaeologically he worked predominantly in Carthage, actual projects deal with early Christianity in North Africa.