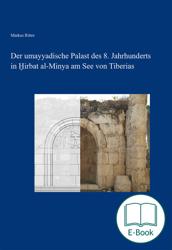 E-book 115.5 MB
The book provides an art historical and archaeological study of the architecture and the architectural decoration of the remarkable early Islamic palatial residence in Khirbat al-Minya at Lake Tiberias in northern Palestine, modern Israel. It constitutes the first monograph publication of finds from German excavations at the site in 1932–39 and their archaeological record, and it contributes to the discussion on Umayyad art and its relation to Early Byzantine and Late Antique art in the Bilad ash-Sham.
The book provides, with substantial new visual evidence, a contribution to the discussion on early Islamic art and architecture in residences of Arab princes of the Umayyad dynasty in the lands of the Bilad ash-Sham during the first half of the 8th century. It studies the architectural remains and architectural decoration of the Umayyad residence in Khirbat al-Minya in northern Palestine, c. 12 km from Tiberias in modern Israel, based on the German excavations in 1932–39, so far known only through brief reports, and on a sounding in 1959.
The site on the northwest shore of Lake Tiberias (Sea of Galilee, Lake Gennesaret), is significant for the Islamic history of settlement in the region. While the book reviews research on this wider history, its main focus is on the Umayyad residence. With a richly furnished basilical hall and a hypostyle mosque directly accessible from outside, the building represents a remarkable variant of the Umayyad residence type of a peristyle courtyard building, which includes public and palatial functions. The location at the lake shore and on a fertile plain close to springs is a vivid argument against uncritical use of the designation ‘desert castles.’
The study discusses and documents all finds of the rich architectural decoration that are now kept in museums at Berlin and Jerusalem and on the site, and the excavated building—re-uniting, presenting and making accessible the material record from the excavations. For the first time, it gains a complete picture of how diverse decorative media and architectural motifs furnished this Umayyad elite residence and of how they relate to local late antique art. Using formal analysis and comparisons with other Umayyad, early Byzantine and late Roman architecture in the region, characteristics of the various decorative media are defined, and questions of evolution, transfer and, in some cases, iconography are investigated. A catalogue of finds assembles all evidence, and drawings reconstruct decorations from fragments. They include marble columns, architectural sculpture and relief in limestone, wall incrustation, marble relief (champlevé) friezes with coloured filling, marble pavement and opus sectile floors, carved stucco on walls, stucco grilles, marble grilles and screens, and wall mosaic. With a substantial index, 72 line drawings and 15 tables in the text, and 560 photos (37 in colour, 10 plans) on fully illustrated pages, the book provides also a lasting documentary and comparative record.