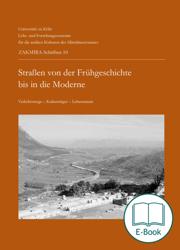 E-book 11.4 MB
Roads have been the key for the development of land and the exchange of goods and knowledge since antiquity. Connecting regions, peoples and cultures, roads have supported social and economic systems through all ages.
In prehistoric times, roads mostly followed the topography of the landscape, using for instance fords and mountain passes and avoiding swamps. The Romans were early masters of road building, their network of roads reaching from the North Sea to the Sahara and from the Atlantic coast to Mesopotamia, amassing a total length of 80.000 km under Emperor Trajan. While many Roman roads were abandoned in early medieval times, most traffic routes in both Western Europe and the Mediterranean continued to follow the course of the Roman roads. In a similar manner, other ancient trading routes, such as the salt roads - some of which date from prehistoric times - remained unchanged in their route until the 19th century. An enduring heritage from prehistoric times and antiquity, roads and trade routes have characterized and shaped the development and history of the landscapes they lie in.
During the 17th and 18th century, road building experienced a boom, most notably under Napoleon, who thoroughly understood the strategic advantages of an extensive network of well-maintained roads. Modern motorisation again increased the importance of roads; old roads were improved, their routes adjusted to the new demands and complemented by bypass roads. In this manner, a gigantic network of new highways with bridges and junctions of generous dimensions evolved and continues to be built.

From the 1850ies onwards, the development of the first boulevards in Paris implies a paradigm shift away from the road as a simple connection between two points. Along those boulevards, meant for leisurely strolling rather than strenuous travel, new branches of trade and commerce settled and influenced the social order of the city. Today’s panoramic roads aim to make regions more accessible for tourists and market their amenities. In both cases, the road’s purpose exceeds that of the quickest connection between two points.

This publication aims to discuss and shed light on the phenomenon “road” from different perspectives and disciplines, aspiring to transcend the description of single streets or road routes and instead trying to capture the spatial, sociological and economic dimension of this large edifice. In addition to administrative, economic, and military questions, the social significance of the roads as a space in which people could make new experiences and encounter other people also plays an important role. A particular aspect is the perception of roads in Antiquity and medieval times. What was the importance of traveling in the pre-modern societies of Europe and what were the risks and exertions of mobility at that time?