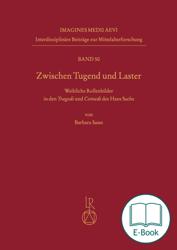 E-book 2.0 MB
The present study is the first to examine in detail a representative corpus of the tragedi and comedi with female protagonists written by the Nuremberg author Hans Sachs. On the basis of a precise reconstruction of the intertextual frame of reference of each of the plays, taking into account both the enormously diverse literary sources and Sachs’ own topically related poems in the form of master songs and narrative poems, the author’s dramaturgical methods are explored more precisely. The "serious" drama in particular turns out to be a formidable virtual arena for exhibiting creative female attributes and the female potential for action, bringing out frequently subliminal contradictions to the normative claim to validity of the attached moral instruction. Conversely, in other cases, the moral message also ties in with the literary discourse, for example by tracing female vices back to male misconduct. Seen as a whole, the author's attempt to negotiate new, more reciprocally conceived ways of dealing with the sexes within the framework of the Lutheran-patriarchal marriage model and the socio-political order that it supports becomes apparent.
Barbara Sasse provides the first detailed analyses of a representative corpus of the plays, the so-called tragedi and comedi, written by the Noremberg shoemaker Hans Sachs (1494-1576) in the middle of the 16th century. For each play is offered a thorough examination of its intertextual frames of reference ; this includes both the literary sources, which Sachs usually conveyed via contemporary German translation, and his own motivic related master songs and rhymed stories (Spruchgedichte). This makes it possible to describe the author's dramaturgical methods more precisely and, in particular, the relationship between acting and moral instruction. Lastly, a closer look at Sachs’ sources also more clearly reveals the author's crucial contribution to both the reception and popularisation of the various European literatures in the German-speaking territories of the 16th century and beyond.
In particular, the study focuses on the numerous female characters in the plays. Sachs, who was enormously interested in literature, drew inspiration for these from the whole Western literary tradition accessible to him, especially on the contemporary book market: the authors of classical antiquity, the spiritual and secular literature of the European Middle Ages and the Italian Humanists. Female figures assume a key function throughout in the contemporary topics discussed in the play, primarily the Lutheran doctrine and its model of marriage and family, but also the political and social discourses of order. In genre-specific terms, the new "serious" drama proves to be a creative virtual space for exhibiting new female attributes and potentials for action, which inevitably bring out subliminal contradictions to the collective moral concepts promoted in the appended doctrine. Conversely, however, the teaching often supports literary discourse, for example by linking female vices back to male misconduct, thus rebalancing the one-sided scolding of women within the framework of an essentially bilateral-structured marriage discourse.
The aim of the book is to make a significant contribution to Sachs’ research in German studies. With the tragedi and comedi, a text corpus and a genre were chosen that have received little attention, especially in more recent studies, in which there have been a clear preference to focus on the master songs. In particular, the book is a quasi-complementary addition to the study by Johannes Rettelbach on the "non-dramatic poems of Hans Sachs", published in 2019 also in the "Imagines Medii Aevi" series.
Barbara Sasse (*1960) studied German Filology and History at the Universities of Düsseldorf and Münster. She completed her studies in 1986 with the title of “Magister Artium” and received her doctorate (Dr. phil.) in 1989. From 1986 to 1990 she was a research assistant at the “Sonderforschungsbereich 231” (“Träger, Felder, Formen pragmatischer Schriftlichkeit im Mittelalter”) at Münster. Since 1990 she has been working at the University of Bari “Aldo Moro”, first as a German lecturer. Since 1996 she taught German literature and actually, as an Associated Professor, German Language. Her research focuses on the literature and linguistic history of the late Middle Ages and early modern times, especially on the proceedings of literary reception and translation literature, the drama of the Reformation period, and the literary and scientific language communication forms of the early printing age.
This series, which will comprise doctoral and professorial dissertations and other monographs as well as collective volumes, aims at highlighting and promoting interdisciplinarity in Medieval Studies even more than is currently the case. Works from all branches of Medieval Studies will be accepted, provided they emphasise the aspect of interdisciplinarity, i.e. they attempt to transgress the boundaries of any single subject.