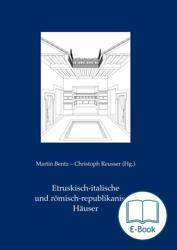 E-book 81.0 MB
In contrast to the tombs and shrines, the pre-Roman houses of Italy have been poorly studied. Although Etruscan studies have for some time been concerned with living quarters of the early Iron Age and the Archaic period, the findings from the 5th Century BC remain hardly known. The study of early Roman houses, on the other hand, has been strengthened in recent years by new research in Pompeii and the Roman colony cities, making use of different methodological approaches.
This volume includes the contributions of a symposium held from January 23-25, 2009 in Bonn, where the partially parallel, but often separately ongoing research on Etruscan-Italic and Roman Republican houses were combined in a fruitful dialogue. The result is a systematic survey of the findings from the Po plain to the south of Italy, the spectrum of housing types ranging from log cabin to a complex atrium house. Many new excavation results are presented for the first time and place the topic on new footing.