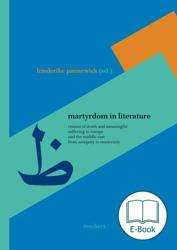 E-book 74.4 MB
This book aims to achieve a deeper understanding of the very human phenomenon of martyrdom by analysing in detail its highly varied re-enactments in European and Middle Eastern literatures. Despite its divergent historical, religious, philosophical or political circumstances, there does seem to be a certain inner logic, a metaphorical structure or symbolical subtext underpinning and thus unifying these heterogeneous literary manifestations of the idea of martyrdom.
In this volume, eighteen researchers from the fields of literary, historical and religious studies reflect on the way concepts of martyrdom are represented, staged, praised or critically deconstructed in different world literatures.