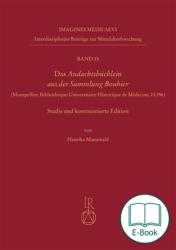 E-book 240.3 MB
This small-size manuscript, probably produced in the second quarter of the fourteenth century in eastern central Germany, is here studied in depth for the first time. The manuscript is without any known parallels as regards its structure: illustrated with coloured pen-and-ink-drawings throughout, the manuscript consists of a sequence of images with German-language partial paraphrases of gospel pericopes, a festival calendar with pictorial abbreviations as well as an image cycle on the passion. As it is linked to Dominican liturgy as well as elements of folk tradition and was in use until the early sixteenth century, as later additions in the calendar section show, it is here interpreted as a meaningful document of the history of piety in the late Middle Ages.
In the seventeenth century a small-size parchment manuscript with German text, illustrated throughout with coloured pen-and-ink-drawings, entered the book collection of the Bouhier family in Dijon. This manuscript (of which 48 folios are still extant), presumably produced in the second quarter of the fourteenth century in eastern central Germany, is without parallel with regard to its structure: A first part (not completely preserved) displays on each page an image relating to a gospel pericope; above the image a German text indicates the occasion for the reading, followed by a partial paraphrase of the content of the pericope, sometimes breaking off in the middle of a sentence. This section is followed by a festival calendar with pictorial abbreviations. The sequence closes with a passion cycle without any textual elements. The provenance of this unique manuscript cannot be traced back beyond its cataloguing in Dijon; information about its origin and the context for its use can only be inferred from the object itself.

This publication presents the first edition and detailed study of this manuscript, including a determination of its function (‘Andachtsbüchlein’ – ‘devotional booklet’) and the evaluation of its role within the history of piety. Among other aspects, the analysis covers codicological and palaeographical questions, the liturgical context, the structure of the text and the iconography. The findings are contextualized and set in a larger frameworks, such as the increasing spread of German-language pericopes in the late Middle Ages. The accompanying edition offering a complete reproduction of all pages of the manuscript in colour with adjacent commentary enables the immediate verification of the individual observations.

In the context of German studies the exploration of the manuscript text leads to new insights, since it expands the existing picture of how pericopes in German language were dealt with. The fact that the paraphrases regularly break off enables conclusions on techniques of reception as well as the educational preconditions. In terms of art history the analysis of the manuscript contributes an important building block to the yet-to-be-written history of illustrated cycles of pericopes. Moreover, the manuscript displays iconographically rare motifs, for instance in the calendar, whose type is not attested elsewhere in German-speaking countries as part of a book. In particular, the manuscript conveys insights into elements of the history of piety: already in its original form it displays links to liturgical frameworks, especially Dominican liturgy, as well as to folk traditions. Additions of images and texts in the calendar, extending until the early sixteenth century, document a continuous intensive use, for example in a Carthusian context as well as in connection with the veneration of saints as helpers in need. Accordingly, the manuscript points to interactions between different religious spheres, as they will have to discussed further for the religious history of the late Middle Ages.

Henrike Manuwald (* 1980) studied German Literature, English Literature and Art History at the Universität zu Köln. There she obtained her PhD in 2006, with a study entitled Medialer Dialog. Die ‚Große Bilderhandschrift‘ des Willehalm Wolframs von Eschenbach und ihre Kontexte. At the Albert-Ludwigs-Universität in Freiburg im Breisgau, where she worked as a Junior Professor of Medieval German Studies from 2008 to 2016, she completed her ‘Habilitation’ in 2014, with a study entitled Jesus und das Landrecht. Zur Realitätsreferenz bibelepischen Erzählens in Hoch- und Spätmittelalter. Since 2016 she has been a Professor of Medieval German Studies at the Georg-August-Universität Göttingen. Her main areas of research include intermediality, ‘Law and Literature’ and historical semantics; moreover, she is interested in issues of cultural history, especially in the context of medieval devotional practices.
This series, which will comprise doctoral and professorial dissertations and other monographs as well as collective volumes, aims at highlighting and promoting interdisciplinarity in Medieval Studies even more than is currently the case. Works from all branches of Medieval Studies will be accepted, provided they emphasise the aspect of interdisciplinarity, i.e. they attempt to transgress the boundaries of any single subject.