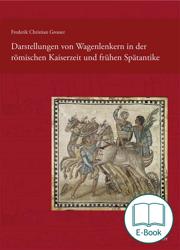 E-Book 32.3 MB
Epigrams, passing remarks, and treatises dealing with the chariot races in the Roman circus and their participants have been handed down by numerous ancient authors. Whether described by Pliny, Martial, Juvenal, Ammianus Marcellinus, or Tertullian, charioteers are frequently viewed in a derogatory light, since they were mostly slaves and freedmen who were able to achieve enormous popularity and financial wealth as a result of their celebrated activities – much to the disapproval of the authors, most of whom came from the senatorial class. The literary tradition is only one side of the coin, however, for representations of charioteers and chariot races have survived in significantly greater numbers. There seems to be no pictorial medium in the Roman imperial period that failed to thematize circus charioteers: whether on a millimeter-sized gem or on a room-filling mosaic, whether in the context of a house, within a tomb, or in an urban space – images of the races and the drivers were encountered almost everywhere by their ancient contemporaries.
This extensive corpus of material, which dates from the late 1st century BC to the late 4th century AD, is presented in its entirety here for the first time. The iconographic analysis of the very disparate images is realized by taking into account the respective medial conditions of the image carriers. This approach allows us to distinguish between the media conventions of these representations – for example, what distinguishes the representation of a race in a tomb from that in a house? Central questions taken up in this book, then, concern the representation and evaluation of the drivers in the picture, how the representations were used, and which symbolic as well as metaphorical associations they contained. Moreover, the analysis of the material as a collective allows for the identification of specific focal points in the (self-)staging of charioteers in the Roman Imperial period and early Late Antiquity: Here, the focus is especially on their representation as victors and the use of the races as a mourning formula in a funerary context.
Publications by international researchers over the past several decades testify to the unbroken interest in both the races and the charioteers. The present work now fills in a gap in their documentation: instead of focusing on isolated images that are particularly well known because of their quality or state of preservation, access to the entire diversity of circus images is now possible. The chariot races, as probably the most visited and most important spectaculum of the Roman world, are thus documented at once comprehensively and in detail.
Born on 13 January 1986
2007-2010: Bachelor of Arts in Archaeological Sciences (major) and History (minor) at the Albert-Ludwigs University Freiburg im Breisgau
2010-2013: Master of Arts in Classical Archaeology at the Albert-Ludwigs University Freiburg im Breisgau and at the Julius-Maximilians University Würzburg
2013-2018: PhD in Classical Archaeology at the Albert-Ludwigs University Freiburg im Breisgau with the dissertation: Images of Charioteers in the Roman Imperial period and early Late Antiquity
01.01.2019-31.12.2020: Scientific traineeship in the Collection of Antiquities, Staatliche Museen zu Berlin
01.01.2020 onwards: Research assistant in the Collection of Antiquities, Staatliche Museen zu Berlin
Research interests: Visual culture of the Roman Imperial period, Roman spectacles