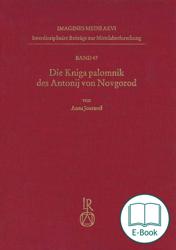 E-book 9.6 MB
This book contains the first study of the text transmission of the Kniga palomnik by Anthony of Novgorod. From the philological perspective, the edition offers a new text basis for further research into the characteristics, the transmission and reception of Russian pilgrim literature; and from the historical and archaeological perspective, it provides access to a textual source which is crucial for the reconstruction of the sacred topography of the former Byzantine capital.
The Kniga Palomnik, a pilgrim report written in 1200 by the Russian pilgrim Dobrynja Jadrejkovič (the future Archbishop Anthony of Novgorod) is known as the most detailed and, at the same time, most confusing description of the sacred places and relics of Constantinople on the eve of its plunder in 1204.
The text, which is preserved in manuscript miscellanies from the 16th-18th century, however, is only known from a Russian edition prepared in 1899, which was based on about half of the manuscripts known today and hence provides a distorted image of the author as somebody whose confusing travel notes emerge from a fading memory, leading to a dislocation of churches and a contamination of travelling routes.
This work provides a new commented critical edition of the text. It opposes the entrenched scientific opinion regarding the number of the text‘s redactions, its dissemination or the time and date of its record. Moreover, it shows how the author’s reputedly confused modus operandi might be untangled by taking into consideration the whole manuscript tradition and the text structure. His report can hence be considered as an authoritative historical source.
With its layout, the edition addresses a broader circle of recipients than it is customary for historical-critical editions. The manuscript text is presented unchanged (although accompanied by a critical apparatus). It is, however, confronted with its (German) translation, which at the same time is a reconstruction and reinterpretation of the text. The detailed explanation of the provided reconstruction proposals is to be found in the commentary which precedes the edition. The transparency of actual transmission and hypothetical reconstruction is ensured by various typographical emphases. It is thus possible to read the text in the translation as it was presumably intended by the author, and at the same time to retrace the editor's text-critical decision by concidering the given complete and authentic textual tradition.

Therefore, from the philological point of view, the edition offers a new text basis for further research into the characteristics, the transmission and reception of Russian pilgrim literature; and from the historical and archaeological perspective, it provides access to a textual source which is crucial for the reconstruction of the sacred topography of the former Byzantine capital.

Anna Jouravel, born 1982, has studied Slavic and Indo-European studies in Berlin. She worked as a research assistant at the Faculty of Theology at Friedrich Schiller University in Jena and at the Institute for Slavic Studies at Martin Luther University in Halle (Saale), where she received her doctorate in 2018. She is currently a Feodor Lynen Fellow (Alexander von Humboldt Foundation) at the Institute of Byzantine Studies at the Serbian Academy of Sciences and Arts in Belgrade.