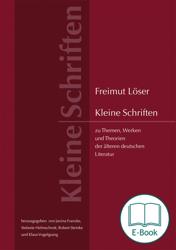 E-book 5.2 MB
On the occasion of the 65th birthday of Freimut Löser, professor in ordinary for German language and medieval literature and holder of the Chair for German Language and Literature at the University of Augsburg, this volume with a selection of his short writings has been published. In Medieval German Studies, Freimut Löser's name stands for two main topics: the pre-Lutheran Bible translation and, in particular, the Austrian Bible translator, as well as Meister Eckhart and German mysticism. But Löser's research interests are by no means exhausted with these two fields. And so the contributions compiled in this volume present other, but no less important aspects of his diverse scientific work. The seventeen essays reflect a varied œuvre: studies on Arthurian novels, minnesong, ‘Sangspruchdichtung’, literature of the late Middle Ages, and literary theory – the contributions document a broad range of research interests and a variety of methodological questions to which Löser has devoted himself continuously in addition to his two major research emphases.